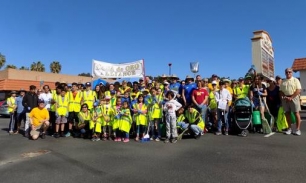 August 11, 2018 (Casa de Oro) -- The Casa de Oro Alliance has been awarded a $500,000 grant from the San Diego Association of Governments (SANDAG) to improve the Campo Road business corridor in the East County community.

The money is part of SANDAG’s Smart Growth Incentive Program and funded by the half-cent Transnet tax. It will be used to design a plan on how to upgrade and overhaul the area that has been in decay for decades, according to Bob Yarris, the Alliance’s chairman.

“We desperately need a specific plan with comprehensive design guidelines to put an end to the chaotic, unorganized proliferation of high risk adult businesses,” Yarris said.

“We will transform Casa de Oro into a model example of how a determined, committed, concerned, and yes, at times very angry, vocal citizens group can improve the quality of life and make a lasting, smart, positive neighborhood difference for generations to come.” Yarris made the comments to the SANDAG board of directors before the unanimous vote to approve the grant.

While the money will be spent entirely in Casa de Oro, it will also be good for surrounding communities, La Mesa City Councilmember Kristine Alessio said.

Alessio is on the SANDAG board and was one of the 18 votes that approved the grant.

“I grew up wandering around Casa de Oro, and it has changed. And I look forward to it once again…being the city of gold,” she said.

Ed Batchelder, the Alliance secretary, is a 28-year resident of the area and retired city planner from Chula Vista who also addressed the board. “This is a really committed group of people. I think good things are really going to happen.”

The Casa de Oro Alliance was formed after the East County Youth Coalition assessed the liquor stores along Campo Road and found that all of them were out of compliance with state regulations, according to the group’s website. When the youth coalition presented its results to residents and business owners in Casa de Oro, the community mobilized into the Alliance.

“I look at Campo Road and I’ve seen this go on for 20 years,” said Roy Davies, an Alliance member and Mt. Helix resident. “This has been truly a community effort.”

The grant application said the money would be used to develop a Specific Plan for the Campo Road corridor, including a form-based-code and design guidelines, and would establish a framework to guide future private investment to transform the area into an inviting, compact, walkable and bikeable environment.