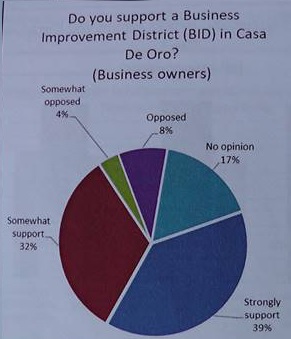 By Jake Christie
February 8, 2020 (Casa de Oro)--During a January 16 meeting, the Casa de Oro Alliance revealed the results of its September 2019 community survey, which had 490 respondents from the regular populace of Casa de Oro and the business community, who were contacted through mailers, emails, the CdO website and on Twitter, Facebook, and Instagram.
The subject of the survey was the business district on Campo Road between Kenwood Drive and Sweetwater Springs Boulevard; the average age of the respondents was 49 and they had lived in Casa de Oro 25 years.
The presentation was made by David Shorey of the Institute for Public Strategies East County Project.
More than 85% of those surveyed said they visit the Casa de Oro area often. 10% work in Casa de Oro and 6% own a business there.
Asked if they would support a business improvement district (BID), 39% of business owners surveyed said they would strongly support a BID and another 32% would somewhat support one.
"I was impressed that 71% of businesses were interested in forming a BID," said CdOA President Bob Yarris. "Most of the successful programs, like the one in North Park, etc. that's how they get launched. We have 25 members who have agreed to be on our advisory council, many of them business owners, landlords, etc. property owners who are probably engaged in agreeing with that idea."
Yarris also called for a moratorium on liquor licenses in the Casa de Oro area, particularly for liquor stores, but would make exceptions for nice restaurants.
4 minute video specifically on liquor licenses https://youtu.be/Qb_D702vXMs
Link to video of full meeting:  https://youtu.be/1La67yWHA6Q