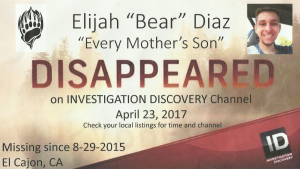 April 17, 2017 (El Cajon) — “Every Mother’s Son,” an Investigation Discovery TV show episode about the disappearance of Elija “Bear” Diaz, will air on April 23rd at 7 p.m.

Diaz vanished in the middle of the night of August 29, 2015 from his El Cajon home and his family suspects he met with foul play. A member of the Barona Band of Mission Indians, he was 20 years old at the time.

“We are encouraged that this national focus on Bear’s case will spark someone to remember any clues that might help us find him,” said LeLanie Thompson, Bear’s mom. “We miss our son and won’t stop looking for him until we have some answers about his disappearance. We appreciate the community’s continued support.”

A private investigator hired by the family called Diaz’s disappearance disappearance “suspicious,” NBC 7 reported.  Diaz has juvenile diabetes and had been suffering acute side effecst of the illness, leaving him weak, immobile and vulnerable. He and had a serious foot injury at the time of his disappearance; he was likely on crutches. His family was deeply concerned that he left with only enough insulin for a week and missed several doctor’s appointments.

A wide-screen TV, backpack and cash were missing from his room.  Diaz left without his toothbrush, glasses and cell phone charger. His family has had no communications with him.

He was last seen wearing white baseball shorts  and a gray sleeveless t-shirt.  He is 5.10”, approximately 110 pounds and has brown hair and brown eyes. 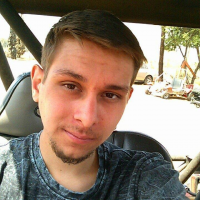 Friends and family members have been volunteering their time since he first went missing. They have canvased the community, held candlelight vigils and worked with police and private investigators to help gather information in the hopes of bringing him home.

“We really need to spread the word as much as possible in hopes someone who sees the program will have information that could lead us to how Bear became missing,” says Adele Wedel with Bring Bear Home. “After the airing of the show, we are asking that anyone who would like to make a comment to please post it on the Bring Bear Diaz Home page on Facebook.”  Question can be sent  to BringBearHome@mail.com or posted on the Facebook page.

If you have information about this missing young man, please contact the El Cajon Police Department at (619) 579-3311.