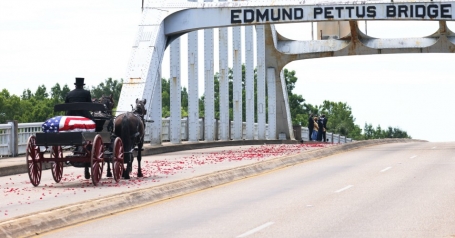 "An incredibly moving and fitting tribute for John Lewis, a man who carried the baton of justice until the very end."

July 26, 2020 (Selma, Ala.) - The casket of Congressman John Lewis, who died on July 17 following a battle with pancreatic cancer, was carried across the Edmund Pettus Bridge in Selma on Sunday 55 years after the Georgia Democrat led a civil rights protest march and was beaten by Alabama state troopers in an event that has since been known as Bloody Sunday.

Lewis's final journey across the bridge by horse-drawn caisson followed a service at the Brown Chapel A.M.E. Church in Selma and came before the late civil rights icon will lie in state at the U.S. Capitol next week. The Washington Post reported Thursday that "only a smaller, invitation-only group will be allowed inside the building on Monday afternoon for a ceremony under the Capitol Rotunda. Lewis's casket will then be moved to the top of the steps at the East Front of the Capitol for public viewing."

The Sunday service and bridge crossing, which was live-streamed and drew a crowd, elicited a fresh wave of tributes honoring Lewis's legacy. In a tweet Sunday, Sen. Kamala Harris (D-Calif.) called the crossing "an incredibly moving and fitting tribute for John Lewis, a man who carried the baton of justice until the very end."

Bernice King, the daughter of Martin Luther King Jr., on Sunday shared a recent personal memory of Lewis, writing on Twitter that "when I visited Uncle John a week before he died, I looked in his eyes and said, 'Well done.' I told him that I loved him and that we are going to continue to fight. So I must mourn and move at the same time."

Filmmaker Ava DuVernay wondered: "When Alabama state troopers beat and bloodied him on the Edmund Pettus Bridge in 1965, could a young John Lewis ever have imagined this day? That he'd live to be 80. That he'd be a lawmaker for decades. That his remains would cross the bridge again, this time lined with roses."

The rose petals on the bridge represented the blood spilled on March 7, 1965, when state troopers attacked Lewis—then chairman of the Student Nonviolent Coordinating Committee—and his fellow marchers with billy clubs and tear gas. Lewis, who suffered a fractured skull, later said, "I thought I was going to die on that bridge."

Kristen Clarke, president and executive director of the Lawyers' Committee for Civil Rights Under Law, expressed hope that the bridge will soon bear Lewis's name.

The bridge is currently named for a former Confederate general and Ku Klux Klan leader. In the years after Bloody Sunday, Lewis led subsequent marches across the bridge, including earlier this year. Since his death in mid-July, calls have mounted for the bridge to be renamed to honor Lewis.

As the Post's reporting on the John Lewis Bridge Project explained Sunday:

"There are two petitions now, on Change.org and the project's website, that have picked up steam since Lewis's death. As of Saturday, about 715,000 people had signed them, including Selma director Ava DuVernay, Kerry Washington, Paul McCartney, Dan Rather and Pettus' great-great-granddaughter, Caroline Randall Williams, who is black.

DuVernay tweeted: "Edmund Pettus Bridge should be the John Lewis Bridge. Named for a hero. Not a murderer. Join this call. It's past due." The Rev. Jesse Jackson has also voiced support for the renaming. A separate fundraising campaign is being hosted by ActBlue, an organization that raises money for liberal grass-roots causes."

When Lewis walked across the bridge with House Speaker Nancy Pelosi (D-Calif.) in March, he told a crowd that had gathered that "it is good to be in Selma, Alabama, one more time... To take a little walk to try to dramatize the need for the rights of all our people to be able to participate in the democratic process."

In 1965, public outrage over televised footage of the brutality endured by civil rights activists on Bloody Sunday helped push Congress to pass the Voting Rights Act within months. Journalist Ari Berman, who has written extensively about voting rights in the United States, took to Twitter Sunday to call out Senate Majority Leader Mitch McConnell (R-Ky.) for holding up a vote on a bill to restore the landmark law.

Concerns about voting rights have grown this year in the midst of the coronavirus pandemic and President Donald Trump's baseless attacks on vote-by-mail.

"The biggest issue is we have an election in the middle of a health crisis and we haven't put adequate resources into dealing with that," Cliff Albright, a Georgia activist who co-founded Black Voters Matter, told USA Today Saturday. "From where I stand, it's almost like we're fighting similar issues that John Lewis and his friends fought."