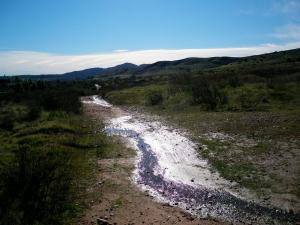 July 7, 2013 (San Diego’s East County) – A controversial housing project that could include up to 430 residential units on 204 acres will be heard by the San Diego Planning Commission on Thursday, July 11 at 9 a.m.  The public can attend and testify at the hearing, which will be held at Council Chamber, 12th Floor, City Administration Building, 202 C Street in downtown San Diego.

The project proposed by Pardee homes has sparked substantial opposition from environmentalists and residents.  A 925-page environmental impact report details significant negative impacts on wildlife and the environment.  ftp://ecity.ci.santee.ca.us/DDS/FinalEIRCastlerock062013.pdf

Preserve Wild Santee’s Facebook page describes Castlerock as “a monstrous housing development in San Diego and Santee” which “proposes to destroy four vernal pools and fairy shrimp, without examining the cumulative impact of these projects …”

Coastkeepers, a watchdog environmental organization, has objected to the project in a July 30,2012 letter to the City’s Development Services Center. Coastkeepers letter stated, “The Castlerock project should not move forward because San Diego’s current water supply cannot support the addition of theis project.”

California Chapparal Institute and Preserve Wild Santee, in a joint letter to the same agency in June 2012, cited impacts on several endangered or threatened species and asked why alternatives have not been considered.  The groups also cited concerns over adverse impacts to Stowe Trail, an officiaily recognized historic trail and accused city officials of ignoring impacts from quadrupling daily tonnage at Sycamore Landfill.  In addition, they cite concerns including fire danger, traffic, and increased flood risks, and potential discharge of raw sewage into the San Diego River.

Pardee’s website contends that “through its preservation of open space, a mix of residential homes and proximity to existing recreational areas, the master-planned community of Castlerock will be the ideal environment for growing families and recreational enthusiasts.”  Homes would range from 1700 to 3800 square feet.

The project is proposed on the north side of Mast Boulevard between Medina Drive and West Hills Parkway, near State Route 52 on one of the largest undeveloped parcels left in Santee.

The project was first proposed in 2004 but was shelved until recently, but has now been revived.  Santee residents have repeatedly complained about lack of notice from the City of San Diego for proceedings involving the project.

Two plans are being considered, including one that involved annexation of a portion of the lands.

Councilman Rob McNelis said back in 2001 that the city of Santee was being given no say-so in the project. “The City of San Diego cannot only build homes on this land if they get their EIR certified,” he said, “but keep all of the property tax revenue derived from the project and stick the city of Santee with the cost of public safety, road maintenance and traffic impacts. “