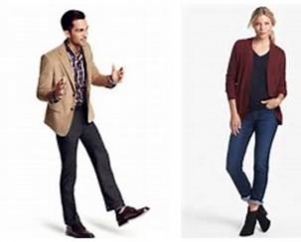 June 9, 2016 (Menlo Park, CA) -- Dressing up for work continues to go out of style, new research from staffing firm OfficeTeam shows. Half (50 percent) of senior managers interviewed said employees wear less formal clothing than they did five years ago. In addition, nearly one-third (31 percent) of office workers stated they would prefer to be at a company with a business casual dress code; 27 percent favor a casual dress code or no dress code at all.

But there are limits to what passes as acceptable office attire. When senior managers were asked about the most common dress code violation at work, wearing overly casual clothing was the top response (47 percent), followed by showing too much skin (32 percent).

View an infographic of the survey findings.

Senior managers were asked, “Do you think employees at your company dress more or less formally than they did five years ago?” Their responses:

Workers were asked, “Which of the following statements most closely describes how a company’s dress code impacts your decision to work there?” Their responses:

*Responses do not total 100 percent due to rounding.

Senior managers were also asked, “Which of the following is the most common dress code violation at your company?” Their responses:

“Employees should take their cues from company guidelines and what others in the office are wearing. Some industries, for example, are more formal than others,” said Brandi Britton, a district president for OfficeTeam. “A casual dress code doesn’t mean that anything goes. Staff should always look professional and project an image that reflects positively on the business.”

OfficeTeam offers seven questions employees should ask themselves when choosing what to wear for work:

1.     Does this follow company policy? If there’s a written dress code, abide by it. Also consider what your manager and coworkers wear, and use that information to guide your choices.

2.     Am I revealing too much? If you have to ask yourself this question, the answer is likely “yes.” Avoid clothes that show too much skin, and err on the side of caution when displaying tattoos or piercings.

3.     Is this distracting? Wearing wild or bright prints can attract attention for the wrong reasons. In most workplaces, neutral colors and simple patterns, such as pinstripes, are a safe bet.

4.     Am I overdoing it? Take a subtle approach tojewelry, makeup, perfume and cologne.Also note that unconventional hair colors or styles and unkempt facial hair may be frowned upon at more conservative companies.

5.     Do I feel confident? If you’re uncomfortable in your outfit, it’ll show. Make sure your clothes fit well and don’t require a lot of readjusting.

6.     Will I offend anyone? Steer clear of wearing apparel with profanity, political statements or other questionable material.

7.     Does it pass the final check? Give yourself aonce-over from head to toe. Look out forwrinkled, torn or stained garments and scuffed shoes.

The surveys of senior managers and workers were developed by OfficeTeam. They were conducted by independent research firms and include responses from more than 300 senior managers at U.S. companies with 20 or more employees, and more than 350 U.S. workers 18 years or older and employed in office environments.

OfficeTeam, a Robert Half company, is a staffing service specializing in the temporary placement of  skilled office and administrative support professionals. The company has more than 300 locations worldwide. For additional information, visit officeteam.com. Follow the OfficeTeam Take Note® blog at blog.officeteam.com for career and management advice.