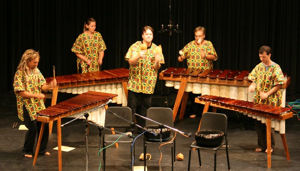 March 13, 2012 (El Cajon) -- Zimbeat brings the dynamic village music of Zimbabwe, Africa to Cuyamaca College for a one-night-only performance on Thursday, March 22, at the Cuyamaca Performing Arts Theatre.
This music of this San Diego-based ensemble is based on the Shona peoples' traditional instrument, the mbira Dzavadzimu. Consisting of 22 to 28 metal keys mounted on a hardwood soundboard, the mbira Dzavadzimu is played with two thumbs and the right forefinger. Hypnotic interlocking melodies and spirited African rhythms culminate in the captivating and compelling music that is found in traditional and contemporary Zimbabwe. Zimbeat performs as an mbira group, a marimba ensemble, and an Afro-pop electric band..