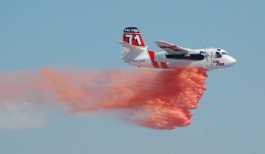 July 18, 2011 (Jacumba) – The Buffalo Fire, which charred over 25 acres near Jacumba earlier this week, was caused by illegal burning.

“A resident who is Native American had a sweat lodge or ceremonial area,” Cal-Fire Captain Mike Mohler said. “They were burning some leaves or other material in preparation and that spread to a chicken coup, then to an outbuilding.”

SDG&E shut off power to the residence as a preventative measure while firefighters battled the blaze, Mohler indicated. There was no damage to homes, however two outbuildings were burned.