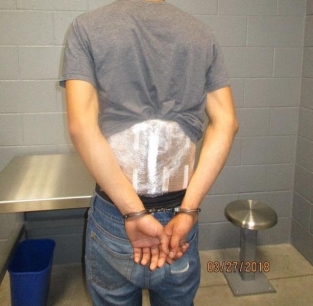 April 2, 2018 (San Diego) - U.S. Customs and Border Protection officers at the San Ysidro port of entry thwarted two alleged narcotic smuggling attempts after discovering one teen carrying packages of fentanyl strapped to his body and a young woman concealing fentanyl and cocaine in her vehicle.

On Tuesday, Mar. 27, at about 7:20 p.m., CBP officers at the San Ysidro Pedestrian West border crossing encountered a 16-year-old male U.S. citizen. A CBP officer conducting inspections at the primary booth noticed something concealed on the teen’s back. The CBP officer referred him aside for further examination. CBP officers conducted a search and discovered two packages of fentanyl weighing a total of five pounds. The fentanyl carries an estimated street value of $150,000.

A couple days later on Mar. 29, at about 12:30 p.m., a 17-year-old girl driving a red 2016 Volkswagon Beetle approached a designated SENTRI booth for inspection.  The driver presented her SENTRI card to the officer.  The CBP officer noticed some discrepancies during the inspection and referred the vehicle and occupant for a more in-depth examination.

A CBP canine team was roving and screened the vehicle as it waited to be escorted aside for further inspection and the detector dog alerted to the vehicle. 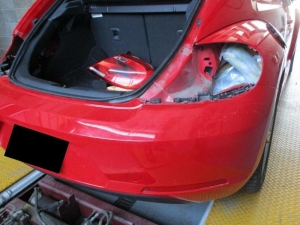 CBP officers utilized the port’s imaging system and discovered anomalies in the quarter panel. CBP officers extracted eight packages of fentanyl and seven packages of cocaine. The weight of the narcotics was 37 pounds with an estimated street value of $770,000.

Both teenagers were arrested and turned over to Homeland Security Investigations for further processing.

“CBP officers are often asked, what is the profile of a typical smuggler?  Unfortunately, we catch persons of all ages with narcotics,” said Director of Field Operations Pete Flores.  “We want teens to understand that no matter what you may be told, there are consequences for engaging in this type of activity, not to mention the dangers of working with transnational criminal organizations.”

...and never will, because it's literally impossible to screen every person and vehicle entering the U.S. Under age kids are usually returned back to Mexico without prosecution. Watch BORDER WARS & DRUGS, INC. and you will be shocked as to what's going on at the border and in the United States!