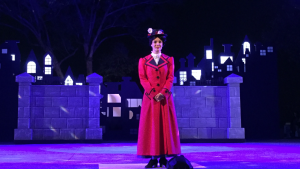 July 15, 2015 (Mt. Helix) --The magic of Mary Poppins rises up on Mt. Helix this week - as she did in the sky above London - in this favorite  childhood story performed by Christian Community Theater. Mary Poppins: the Broadway Musical runs from July 9-August 2, 2015 and is the second summer production since CCT’s return to the Mt. Helix outdoor amphitheater. The players act, sing and dance their way into the hearts of the audience in this charming story of childhood and redemption, with a few surprises along the way. 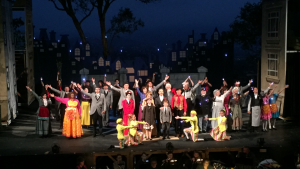 Against a background of stunning views of San Diego County from daylight to sunset and then starlight, the actors, orchestra and ensembles transport the audience into 19th century England with an on-site orchestra, lively choreography, and winning songs. “A Spoonful of Sugar” is better than “Brimstone and Treacle.” The popular “Supercalifragilistic” is performed with an ensemble of adults and children. It is an extravaganza of action: colorful costumes, singing, dancing, swirling, leaping, facial expressions, and hand motions spelling out the letters of that crazy word we love—supercalifragilisticexpialidocious!

Even the set is magical. The home of the Banks family is constructed in three parts like a giant dollhouse of two stories, each on wheels and rotated to accommodate different scenes. The lighting effects are dynamic, at times creating giant night shadows across the stage and the dark house. London is background with a skyline of tall building and lighted windows whose colors change from gold to blue to red. The sound system works flawlessly in this outdoor venue. And there are other surprises, besides new songs and lyrics. 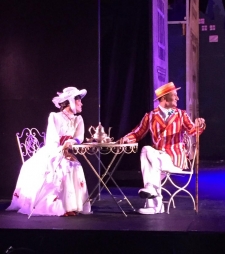 Mary Poppins, convincingly portrayed by Ally Lawton, plays opposite Bert, portrayed by Michael Oakley. Ms. Lawton is a lovely incarnation of the inimitable Mary Poppins with her clear, melodic voice and confident acting—no easy feat. By the end of her first number, “Practically Perfect,” we know she has carried it off. To us, she is Mary Poppins in that wonderful coat and hat, with her umbrella and carpetbag. Just as she wins over the Banks children, Jane and Michael, she wins over her audience. 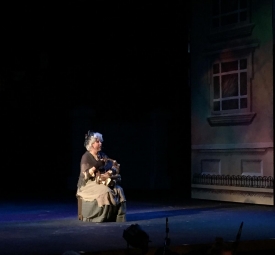 Bert provides a delightful counterpoint to Mary, including their light romance. The lovable chimney sweep provides narration in the play and ties together the story of the Banks family who live on Cherry Tree Lane. This rather physical and demanding role is nicely executed by Mr. Oakley and shows the aspect of love and acceptance in the play. The scene on the rooftop displays his ability when he dances as a chimney sweep high up on the narrow roof of the constructed house. Then, he sings “Chim Chim Cher-ee” with Mary Poppins, all right below the tops of the eucalyptus trees behind the stage area. These two actors effectively interact with the characters of Jane and Michael in a way that imitates parenting and are models for Mr. and Mrs. Banks. 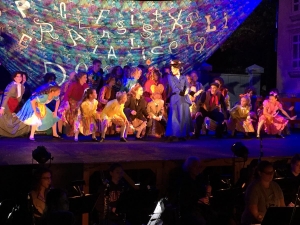 George Banks, the children’s father, who displays early on that he is the one who needs Mary Poppins’ help (not the children), is played by Ed Hofmeister. Hofmeister’s performance moves the audience to both revile and then forgive him as he changes from part-tyrant to vulnerable and lovable dad. Winifred Banks is played by Monica Conway, whose excellent acting shows the many ways she tries to please and support her husband, despite his demanding manner. We rally to her side when she rushes to his aid in the scene at the bank when he expects to be fired from his position. 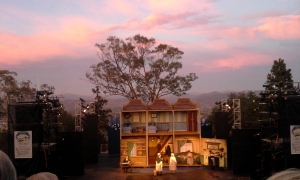 In the performance I attended, the roles of Jane and Michael Banks were played by a brother and sister: Reese and Levi Taylor. Both of their performances were smooth and on-point. As precocious children who are sometimes expressive beyond their age and other times typically misbehaving, the two young actors played their parts in perfect sync with the adult actors. They create the atmosphere of family and—as is sometimes the case in real life—teach their parents how to tolerate them with love.

Children are sometimes more mature than adults in this play, and adults get to act like kids! Carousel horses on wheels and red and white costumes create the scene when Mary Poppins and Bert use their magic to take the children on a “Jolly Holiday.” Later, a group of chimney sweeps become dancers and acrobats, showing that more than good luck comes from shaking hands with a sweep. My young guests remained enthralled throughout the performance. The seven-year-old later said, “I like the part when the dad found his golden stars (from his childhood) in the vase.” The five-year-old explained, “My favorite part was when the police officer was the duty in the park. He said he had never flown a kite before and asked if he could fly it.” 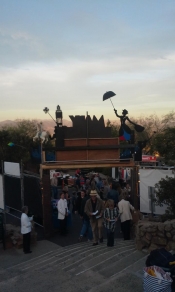 My favorite part was being invited to review another CCT and CYT production for East County Magazine. Each one has more than fulfilled my expectations as I marvel at how a show with so many components comes together with love to an enthusiastic and supportive audience. Last summer, I reviewed Les Misérables, which was an unforgettable performance on Mt. Helix. It’s a delight to see the camaraderie of the participants after the performance. Plus, the volunteers streamline the transportation up and down the summit. My young guests also enjoyed meeting a few of the members of the cast as we waited on line to board our shuttle back down the mountain.

Mary Poppins; the Broadway Musical is directed by Paul Russell and choreographed by Kyle Hawk. The play is musically directed and conducted by Taylor Peckham. This new production of Disney and Cameron Mackintosh’s Mary Poppins is a musical based on the stories of P. L. Travers and the Walt Disney film. Original music and lyrics are by Richard M. Sherman and Robert B. Sherman. The book is by Julian Fellowes. New songs and additional music and lyrics are by George Stiles and Anthony Drewe.

Christian Community Theatre and Christian Youth Theatre were both started by Sheryl and Paul Russell. Classes are offered to youth, who in turn perform fifteen shows annually in five different locations in San Diego. CCT and CYT are the organizations that brought Les Miserables when they returned to Mt. Helix this past summer. CCT began in 1980 and has grown to be the largest community theater organization in San Diego County, with audiences of 18,000 a year.

Coffee and food trucks are available for purchase pre-show and at the intermission. Warm clothes and blankets are recommended for your comfort.

For tickets and performance dates/times, visit their website at http://www.cytsandiego.org or call 619-588-0206.