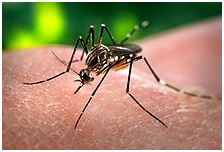 January 15, 2016 (San Diego) – Zika virus has spread to at least 14 countries in the Western hemisphere as well as Puerto Rico. Tests have linked Zika virus to babies born with microcephaly, a birth defect that causes babies to be born with small skulls, brain damage and sometimes death.

Zika is spread by mosquitos biting an infected person and then biting another, transmitting the virus. The worst outbreak is in Brazil, where 3,530 cases of microcephaly in infants have been confirmed—a 20-fold increase over 2014, when there were only 147 cases of the neurological condition.

Women who are pregnant or who may become pregnant should talk to their doctors if they must travel and take steps to prevent mosquito bites.

All travelers to these areas should use insect repellant containing DEET, picaridin, oil of lemon eucalyptus, or IR3535.  The CDC has indicated these are safe for pregnant and nursing women.  You should also wear lightweight long-sleeves and long pants and consider wearing permethrin-treated clothing and gear. Be sure your sleeping area is screened to keep out mosquitoes or has air conditioning.

The mosquito season peaks in April, so many more cases are likely to occur across the Southern hemisphere and other infested areas, health officials warn.  Aedes mosquitoes can also carry deadlyYellow Fever, chikingunya, and dengue fever.

In Mexico, there has been one imported case from Colombia, one case contracted by a mosquito bite in Chiapas and one in the northern State of Nuevo Leon, but authorities fear more cases will be identified .

The disease is primarily spread by mosquitoes, though there is some evidence that it may also be transmitted sexually. The CDC advises that it is possible that Zika could be spread through blood transfusion, though there are no documented cases of this.

Researchers are racing to create a Zika Virus vaccine and improved treatments.  But for now, avoiding areas with Zika outbreaks or taking steps to avoid being bitten by mosquitos if you must travel to infested areas are the only options.

The Aedes mosquito is aggressive during daylight hours, unlike native mosquitoes in our region. It can also breed indoors.  If you believe you may have Aedes mosquitos in your area, contact the County Vector Control office. You can also get more info on how to  prevent mosquito breeding here: http://www.sandiegocounty.gov/deh/pests/wnv/general_information/chd_wnv_mosquito.html

Only about one in five people who contract the Zika virus will develop symptoms.  Symptoms may include fever, muscle and joint pain, rash and conjunctivitis (eye inflammation).  Rarely, complications may include Guillain-Barre syndrome,