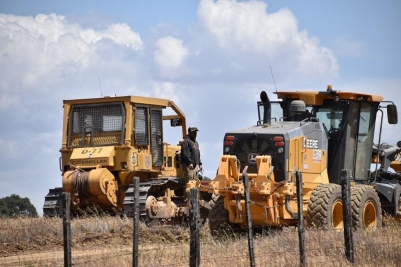 July 1, 2021 (San Diego) - The California Department of Fish and Wildlife (CDFW) has undertaken the largest wildfire protection and resiliency effort in its history, working to safeguard nearly all of its wildlife areas, ecological reserves and the surrounding communities from wildfire ahead of peak wildfire season this summer and fall.

The unprecedented undertaking is the result of SB 85, the “Wildfire Forest and Resilience Early Action Package,” state legislation signed by Gov. Gavin Newsom in April that authorized $536 million in wildfire protection and resiliency spending in the current fiscal year. CDFW is budgeted to receive $15 million of those funds to better protect its lands, which total about 1 million acres. Additional wildfire funding is expected in the 2021-22 state budget.

“This is a huge moment for the department, and we’re really striving for smart projects that will benefit wildlife habitats and the communities surrounding department lands,” said Stafford Lehr, CDFW Deputy Director for Wildlife and Fisheries. “We’ve already identified more than 40 projects, many of which have been started and a few already completed. We’ll be able to hire some new people and buy some new equipment that will not only help protect our own properties but better protect our neighbors as well. In many instances, this wildfire work has the added benefit of improving native plant and wildlife habitat on our properties.”

Among the CDFW wildfire resiliency projects planned or currently underway: