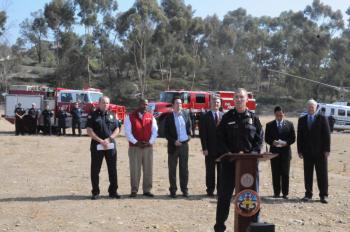 October 25, 2013 (San Diego)—Today political leaders from San Diego City and the County came together with fire officials to remember the 2003 Cedar Fire. The press conference served as both a status report on our region’s ability to respond to the next emergency, as well as a memorial for the 15 San Diegans who died during the firestorm.

The statistics for the 2003 firestorms are staggering even 10 years later.

The Cedar Fire is still the largest wildland fire in California history. It started about 5:40 p.m. on Saturday, Oct. 25, in the Cleveland National Forest southwest of Julian, when a lost hunter lit a signal fire. The Cedar Fire burned 80,000 acres in 10 hours and entered the City of San Diego at 6:30 a.m. on October 26.  It scorched a total of 273,246 acres and destroyed 2,820 structures. Within San Diego city limits, it burned 28, 676 acres and destroyed 313 structures. Fifteen people were killed by the fire, including a firefighter.

This was also, the worst disaster in state history, noted Jacob, who represents the 2nd Supervisorial district encompassing East County. She added that this morning, she drove through Harbison Canyon, one of the worst affected areas during the fire. The people in the East County are resilient and have built even better. Moreover, former strangers continue to work together.

Jacob also said that the County has spent 285 million to be better prepared, since it is not a question of if, but when we will have another major wildfire. She emphasized the formation of the County Fire Authority, which is consolidating rural fire districts, and the five year plan that allows for better planning. Like other officials, she also said that building codes have been changed to harden buildings and that we now have the 100 feet defensible space standard that gives firefighter a fighting chance.

All these initiatives are there to “protect people and property.”

Supervisor Cox was Chairman of the County Board in 2003, and both the 2003 Cedar Fire and the 2007 firestorms offered important lessons. The County first started by upgrading the Communications System, since many units could not talk to each other in the field. In this effort the County has spent $22 million, and the system continues to be maintained.

While every official applauded the Fire Services and First Responders, Supervisor Cox also praised police and sheriff’s officers, many of whom had to go door to door to warn citizens that they were in the line of fire.

After the firestorm was over, Cox worked with former Sherriff Bill Kollander, which led directly to the reverse emergency alert system.

By the time the 2007 firestorms hit, emergency notifications  led to the evacuation of 500,000 San Diegans, which is the largest civilian evacuation in state history.

The County, according to Cox, has also partnered with the 211 system, and in 2007 the system answered 100,000 calls. This partnership now includes directing volunteers to where they are needed in case of another emergency.

Chief Mainar explained that in 2003 about 40% of all engines in the City of San Diego were over 12 years old. These days most of the fleet is newer. Also, due to the risk of embers starting fires, the Department, (like other Departments) has obtained patrol vehicles that can go behind the lines and put out small fires that restart behind lines.

These are small pickup trucks with water and foam, manned by two-man crews. 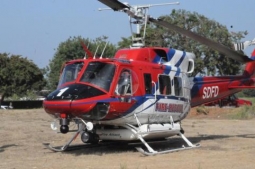 he most important thing he emphasized is that the City acquired two firefighting helicopters that have “night capability and are a force multiplier.” Also that the city trains with other agencies and mutual aid protocols are much stronger.

During this annual multi agency training firefighters learn “how to triage” since not all structures can be saved. San Diego has also increased code compliance officers and has also adopted the Ready, Set, Go program that Cal-Fire has also emphasized.

Chief Porter echoed other officials, when he stated, “We are in lockstep with each other.” He also said that the mutual aid programs now in place with the United States Navy and United States Marine Corp are now seen as a model, and General Charles H. Jacoby Jr sees these agreements and not just ground breaking, but models for other states to use. Among the states that have been targeted are Colorado and Texas.

New agreements will allow Cal Fire, and the National Guard to use Brown Field to reload firefighting large aircraft, including C-130s and Modular Airborne Firefighting System equipped aircraft. Most of these are with the California National Guard 146th Airlift Wing.

According to Interim Mayor Gloria, one of the critical changes is that the City of San Diego and the County now share a command center, no longer duplicating systems. They are strong ties now between the city and the county.

He also emphasized that at this point there is an effort to get one million San Diegans to participate in the Shelter in Place program.

The Prepare San Diego information can be found here:

Citizens should be prepared to shelter in place for 72 hours. A good place to start to build that emergency kit is a flashlight with extra batteries and a battery operated radio, with extra batteries. When power goes out, you will be glad to have both of them.

After the Press Conference was over, ECM asked Red Cross personnel about the shelter situation during the Lyons Valley fire, when an announced shelter was found closed while the fire was still burning. They told ECM that the problem was due to communications between fire officials and Sheriff’s officials who had them stand down before the Evacuation Point was opened. ECM has previously noted these issues: http://www.eastcountymagazine.org/node/13952

Moreover, they offered direct contact information so we can contact the Red Cross supervisory personnel from the field if need be during future emergencies.

ECM asked Supervisor Jacob about the Boulevard station, which has been closed most days in July, August, September and early October after the formerly volunteer station was taken over by the County Fire Authority.

She said that at this time she had no comment on this burning issue, but there  is another side to the story. She also said that she is committed to staffing fire stations 24 hours a day, seven days a week, 365 days a year.