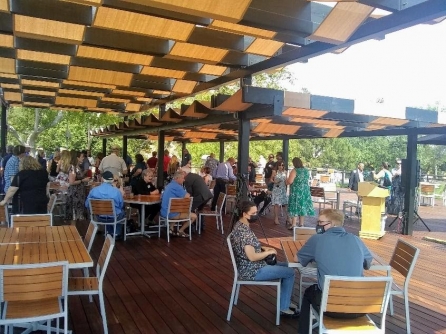 To celebrate the occasion, the agency that owns and operates Santee Lakes, the Padre Dam Municipal Water District, marked it on its 60th anniversary, June 17.

Anniversaries are happy times, but perhaps this event was even more so due to the fact it was one of the first public events in Santee where face masks were absent. After more than a year of enduring a mandated quarantine to reduce the spread of the Covid 19 virus, folks attending the opening were hugging, laughing, smiling.
Really, you could actually see people smiling.
There was even a stand-up comedy act by Allen Carlisle, CEO of Padre Dam, who opened by saying, “The governor ended Corona for us.”
Talking about day 121 of the quarantine, Carlisle quipped, “So I ran out of toilet paper and started using lettuce leaves. Today was just the tip of the iceberg. Tomorrow romaine’s to be seen.”
But seriously, this deck that Padre Dam created deserves some major kudos. It’s the answer to one of the things that this city lacks, places to meet outside where you can relax, kick back, and just feel good about being alive.
Sure, Santee has some nice restaurants with outdoor seating and pretty parks, but this deck feels different. Perched over Lake 4 in the middle of the park, the 4,000- square foot deck allows plenty of space to move around or grab a seat at a table to enjoy a bite from the newly opened Tin Fish Restaurant. 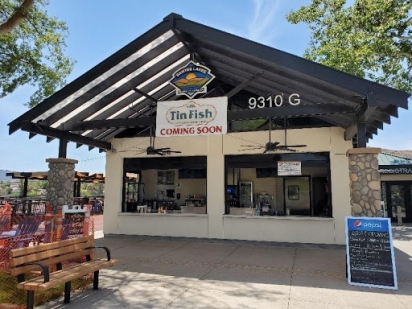 It’s a place that lets an observer appreciate the greenery around them at the man-made lakes, a place that has been nationally recognized for its amenities and innovative use of what is essentially a wastewater treatment plant.
As Carlisle related, the park was the vision of its first general manager, Ray Stoyer, whose name is attached to the wastewater treatment plant just up the road. In the late 1950s, rather than shell out a king’s ransom to San Diego to treat its sewage, Stoyer developed a plan that could treat wastewater to the point where it can be used for irrigation purposes.
Once that project, which attracted worldwide attention, was done, he wanted to make the lakes a place where local residents could come to enjoy nature. When the county said no, Stoyer wouldn’t give up, and rallied the community to back his idea.
The county eventually came around to granting the necessary permits, and on June 17, 1961, Santee Lakes Recreation Park was opened to the public. 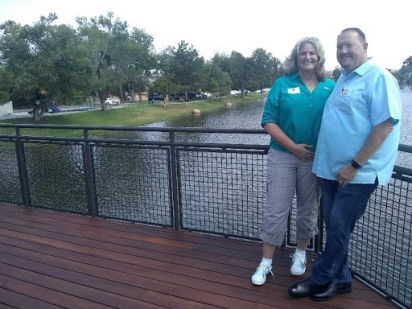 Today, Santee Lakes’ 190 acres offers 300 campsites, 10 floating cabins, hundreds of RV parking spaces, and ample opportunities for fishing, boating, biking, and walking.
Photo, right: Laura Koval and Santee Mayor John Minto
Laura Koval, Padre Dam’s director of parks and recreation, said the project seemed like it took forever, but the wait was worth it. “I think this is the jewel of this park,” she said.
Koval, who is also a member of the Santee City Council, said she was involved in the conceptual planning and design of the deck. The district also wanted to incorporate an eatery so that visitors might be able to linger, have a bite or drink while appreciating the views. 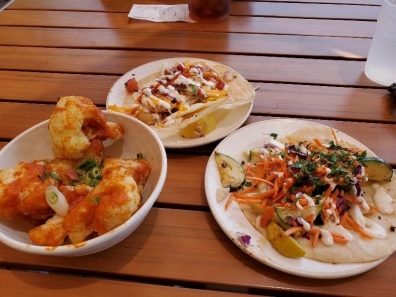 In addition to the deck, the project involves a new administration building, general store, and the Tin Fish restaurant, which served up samples to the invited guests.
The price tag was $9 million, all of it coming from funds generated from user fees, not a dime from taxpayers or water rate payers. Koval gave thanks to the contractors, Team C, the architects, Platt/Whitelaw and project managers, CVSI.
Despite the pandemic, the work only stopped for one day, and was completed on time and on budget, she said.
Most of all, Koval thanked her staff at the park, and finally all the visitors, who numbered about 750,000 a year, pre-pandemic. Once the word gets out about the new deck and the rest of the improvements on Lake 4, that’ll probably go way up.
Learn more about Santee Lakes at www.SanteeLakes.com.