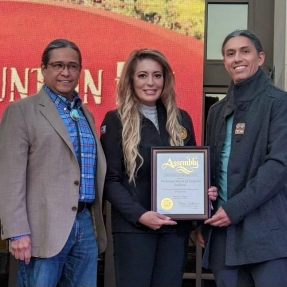 November 21, 2022 (San Diego’s East County) -- November is Native American Heritage Month, a national celebration recognizing Tribal history and sovereignty.  San Diego County is home to more Indian reservations than any other county in the United States. These sovereign tribal governments all lie within the 75th Assembly District, and as their representative in Sacramento, the commemoration has special significance for me.

Self-government is essential so that tribes can protect their unique cultures and identities to enrich the economic, cultural and social fabric of our state and nation. History has not been easy on Native Americans, yet their contributions are irreplaceable. These include military service, such as the Code Talkers of both World Wars, and thousands who serve today. On a per-capita basis, Native Americans have served in the military in greater numbers than any other ethnic group.

Locally, tribal economies generate thousands of jobs, millions in charitable donations, finance basic infrastructure including roads and public buildings, along with services such as law enforcement and public safety. As many of you know, tribal fire departments are an important part of our regions’ emergency response during wildfires.

In 2017, I sponsored the 50th Native American Day at the State Capitol.  Each November, I join Tribal officials and representatives of the City of Temecula to participate in Pechanga Pu'éska Mountain Day, commemorating the tribe’s purchase of their sacred mountain on November 15, 2012. The purchase blocked an intrusive aggregate quarry that would have devastated Pechanga’s sacred mountain and continues to teach an important lesson on Tribal sacred sites and Indian culture.

In the words of this year’s presidential proclamation: “During National Native American Heritage Month, we celebrate Indigenous peoples past and present and rededicate ourselves to honoring Tribal sovereignty, promoting Tribal self-determination, and upholding the United States’ solemn trust and treaty obligations to Tribal Nations.”

Assemblymember Marie Waldron, R- Valley Center, represents the 75th Assembly District in the California Legislature, which includes the cities of Poway, Santee, portions of the City of San Diego, and most of rural eastern and northern San Diego County.