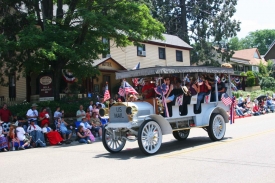 April 9, 2011 (Julian)--The Julian Fourth of July Parade Committee raised over $800 at a fundraiser held at Wynola Pizza on March 28, putting the committee halfway to its goal of raising $6500 from its new corporate sponsorship program. More than 75 people from all walks of life enjoyed themselves at the event while supporting the parade, which Julian has presented for nearly 20 Independence days.

The parade committee has a great reputation for having a good time and the fundraising party was no different.  Bobbi Green, grand marshal for the 2011 parade, was guest of honor at the gathering and brought her husband, Monte, to the event.   She has long been involved with parades in Julian and elsewhere.  She reigned as an Apple Day Queen and as Miss Julian, plus she rode on North County’s Chamber of Commerce Rose Parade award winning float in 1952. 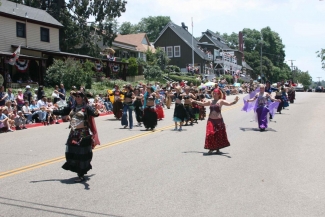 During the 1960s, she decided to put on her own Fourth of July Parade along with the color guard from Julian’s American Legion. The Sheriff told her it was okay as long as there were no cars coming as they were walking down Main Street. If a car came, the parade marchers were instructed to go up on the sidewalk. These days, she is best known as the mistress of ceremonies for Julian’s annual Melodrama; she's been involved with the show for more than 40 years. She has many more accomplishment.

Wynola Pizza has a fund raising program that's available to any non-profit organizations in the community, according to Harry Horner, who helped organize the Parade Committee's fundraiser. When it was all over, he donated 25 percent of the evening's proceeds and paid tribute to the committee and the members of the community who came to the event. 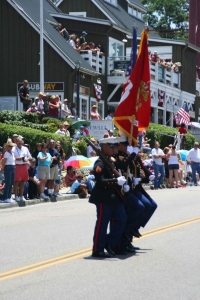 “The number of people who showed up to this event is a tribute to the whole community for their support of the Fourth of July parade,” he said.  In addition to Horner, guests made extra donations to the parade. They were Les Turner, and Tori and Albie Stark.

The Parade Committee still needs funds to help with the cost of the parade. If you are able to donate to this fund please make your check payable to Julian Fourth of July Parade mail to PO Box 777, Julian, CA 92036 or contact Bobbi Zane for corporate sponsorships, 760/765-1224 or bobbi.zane@sbcglobal.net, or Dana Pettersen, 760/703-7593 for community support.