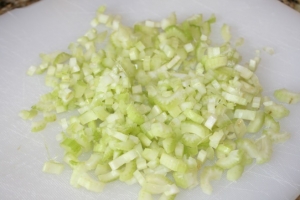 At least 18 people have fallen ill with e-Coli after eating Costco chicken salad made with a mix of diced celery and onions from Taylor Farms Pacific Inc.

The celery mix tested positive for a virulent form of E.Coli that can cause kidney failure in 15 percent of children and 6 to 9 percent of adults. So far, five patients have been hospitalized including two who have suffered kidney failure.

A full list of the stores affected by the recall can be found on the FDA website here.

Symptoms of E.coli infection include diarrhea, abdominal cramps, nausea and vomiting. The incubation period is three to seven days from the time of exposure.

Health officials urge anyone with the symptoms, especially people who have eaten Costco chicken salad, to see their doctor.  If you have potentially tainted products, you are urged to not use them and throw them away.