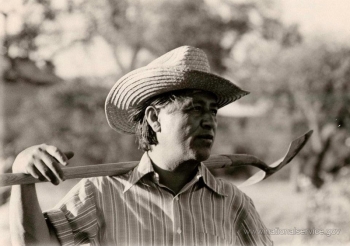 March 31, 2014 (San Diego)—Monday, March 31st is Cesar Chavez Day in California and seven other states.  It commemorates the birthday of the tenacious farm workers’ organizer and civil rights leader.  Now, 21 years after Chavez’ death, a  petition drive has been launched asking President Barack Obama to declare March 31 a national day of service. You can view or sign the petition here: http://www.takepart.com/chavez/petition.

In addition, a new movie , Cesar Chavez: History is made one step at a time,  debuted this past weekend in theaters across the nation, including locally in San Diego and East County.  The movie documents Chavez’ courage amid turbulent times as he fought for a better way of life for farm workers and their families.  View a trailer here: http://www.fandango.com/movie-trailer/cesarchavez-trailer/168951.

His granddaughter, Cynthia Chavez Ybarra, says her grandfather is a hero who taught her very valuable life lessons.  She said, “He showed me how to be proud of who I am, where I came from, and a deep conviction for social justice.”

Born in Yuma, Arizona in 1927  to parents of Mexican descent, Cesar Chavez was an American citizen.  His parents lost their ranch and grocery store in the Depression, so they moved to California.  As a child, Chavez saw his parents toil in the fields picking crops.  In 7th grade, he dropped out of school to become a migrant farm worker so that his mother would not have to work in the fields. He later joined the U.S. Navy. Then returned to marry his high school sweetheart and start his family.

He continued working in the fields until 1952, when he become an organizer in a Latino civil rights group, the Community Service Organization, helping register Mexican Americans to vote and speaking out for workers’ rights.

Like Gandhi and later, Martin Luther King, Chavez believed in nonviolent means of standing up for people’s rights.  He and Dolores Huerta founded the National Farm Workers Association, which merged with another organization and later became the United Farm Workers.

In the mid 1960s, Chavez led efforts to launch a national boycott against grapes grown in California, in a successful effort to win safer working conditions and fairer contracts for workers.    The strike lasted five years and also led to a U.S. Senate subcommittee to hold hearings in California on the strike, during which time subcommittee member Robert F. Kennedy voiced support for the striking workers.

In the 1970s, the UFW organized more strikes, including the Salad Bowl strike, the largest farm worker strike in U.S history, winning higher wages as well as passage of the California Agricultural Labor Relations Act to give farm workers collective bargaining rights.

Then in the 1980s, Chavez led a national boycott against California grape growers to draw public attention to the dangers  that pesticides posed to farm workers’ health.

Chavez engaged in several lengthy fasts during these protests, including one that lasted for 25 days.

Under Chavez’ leadership, the United Farm Workers Union did not advocate illegal immigration and in fact, sought to restrict immigration because the leadership believed that the Bracero Program exploited migrant workers and undermined American workers by bringing in a cheap supply of labor for growers. The UFW was instrumental in persuading Congress to end the Bracero program and even proposed employer sanctions that would have prohibited hiring undocumented immigrants, though later Chavez also helped secure amnesty for millions of undocumented immigrants in the 1986 federal immigration act.

Chavez received many honors during his lifetime, including the Jefferson Award for Greatest Public Service Benefitting the Disadvantaged and the Pacem in Terris Award, named after an encyclical by Pope John XXIII calling for peace on earth.  President Bill Clinton awarded the Presidential Medial of Freedom posthumously to Chavez’ widow, Helen Chavez, in 1994.  Chavez was also nominated three times for a Nobel Peace Prize.

Since his death in 1993, his memory has been honored with several parks named for him, including one in San Diego, the National Cesar Chavez Center in Keene, California, induction into the California Hall of Fame, and even the U.S. Navy has named a ship after him.

In its heyday, the United Farmworkers Union had 50,000 members. Though that has dwindled through the years, Chavez’ supporters want to assure that his memory lives on and that future generations will remember the legacy of Cesar Chavez.  Though Chavez is gone, his spirit lives on in the many people his efforts benefitted, and in the motto he adopted that urged workers to believe that a better life was possible:   Si se puede—Yes one can.