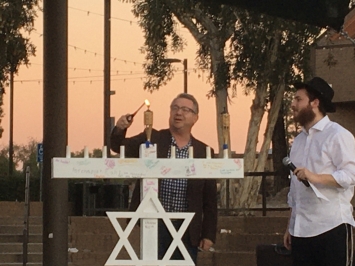 Story and photos by Elijah McKee

December 1, 2021 (El Cajon) — Even the most thought-out plans can be derailed by a last-minute change, especially when a leader falls ill. This wasn’t true for the Chabad of East County on Sunday, though, as they pulled off their first night of Hanukkah event at the El Cajon Civic Center without a hitch, despite the absence of Rabbi Rafi Andrusier and his wife Chaya, who tested positive for COVID-19 the day before.

They are both vaccinated, have mild cases, and will be back to normal soon — but instead of floundering in the unexpected changeup, a team of ten Chabad volunteers filled the void right away to execute the plans with the Rabbi’s virtual support. The event drew a large crowd two years ago but was skipped last year due to the pandemic — so it was all the more important for everyone to hold the tradition this year.

“We are part of his congregation, and we wanted to still do the community activity, because it’s the first night of Hanukkah,” explained Andrea Schneider, a member of the Chabad who helps organize their events. “Basically we’re volunteers that last night made a Zoom call and said, ‘We’ll take over and just tell us what to do.’” 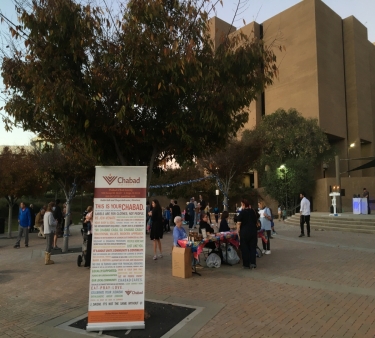 The event featured a “Menorah of Gratitude” with messages of thanks handwritten on it, a “Menorah of Giving” that offered eight baskets as a chance to fill specific needs of El Cajon families through the Jewish Family Service, a children’s craft station to make decorated menorahs, and delicious treats including latkes from The Place Catering and jelly donuts from Lang’s Bakery, both local El Cajon businesses.

“We got notice last night,” continued Schneider. “Thankfully they had done a lot of the planning in advance, they had things ordered and ready and just had to give us instructions.”

On top of the volunteers who stepped up, key to the successful event was Rabbi Rafi’s cousin, Mendel. He was able to come from Los Angeles where he is currently a rabbinical student and add to the event with a retelling of the Hanukkah story and lead appropriate prayers. He explained how he was happy to help, but that the Chabad members deserve most of the thanks.

“It’s a wonderful community here. They all really pitched in. They’re the ones that really made this happen,” he said.

With Mendel’s assistance, Mayor of El Cajon Bill Wells lit the shamash, or helper candle, of the Menorah of Gratitude.

“We are glad you’re kicking of your Hanukkah celebration here in El Cajon, we find it a great honor,” Wells said while addressing the crowd. “I hope that you have a blessed holiday season.”

Later on, while local ventriloquist Joe Gandelman entertained the children in attendance, volunteers turned on battery powered candles that composed the Menorah of Giving. Donna Moore, a Chabad member and volunteer, spoke about how the event asked for only specific items to be donated, 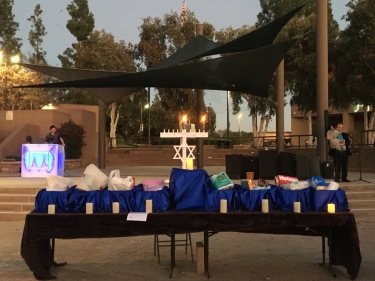 such as tissues, kid pajamas, diapers, toiletries, socks, and toys.

“Some of these families don’t have the ability to cook. So it was kind of silly, in 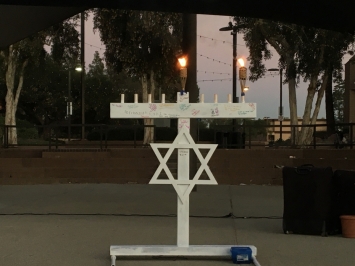 the past we would donate food,” she said while skimming over the baskets. “So that’s why the list was really specific.”

Surrounding the plaza of the event was a separate gathering — groups of Chaldean men clustered around tables playing backgammon and card games, a Sunday tradition of theirs. The two groups coexisted seamlessly. “We don’t want to exclude them,” noted Schneider, who explained how the Chabad often shares the food and trinkets from the event.

Indeed, an energy of resilience and kindness coursed throughout the evening. Mendel put it into words during his Hanukkah story retelling.