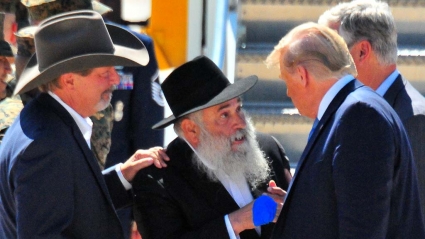 But federal prosecutors have recommended only probation for Goldstein, whose congregation and parent organization have known about the investigation for months but kept it under wraps.

Goldstein, who founded the Chabad in 1986, was shot in the finger during the attack that left worshiper Lori Gilbert Kaye dead.

“The government will make a recommendation that he not spend time in custody,” lead prosecutor Emily Allen told a press conference. Sentencing is set Oct. 19 before downtown federal Judge Cynthia Bashant.

Allen — who also helped prosecute resigned Rep. Duncan D. Hunter — said Goldstein’s work to bring people together in the aftermath of the shooting counted toward the sentencing recommendation. He also contributed with the investigation that led to five men pleading guilty.

U.S. Attorney Robert Brewer Jr. told a news conference: “There is no doubt that Rabbi Goldstein was the victim of a horrific hate crime that terrorized him and the worshippers at the Chabad in April of 2019. That event was a significant, mitigating factor to the plea agreement, but it is no excuse.”

He added: “We cannot look the other way because a perpetrator of a crime becomes, suddenly, a victim of crime. We commend Mr. Goldstein in his community leadership after the shooting, as well as his cooperation once this investigation came to light. But the illegal conduct had occurred for many years and it cannot be ignored.”

Goldstein pleaded guilty to a scheme involving misuse of more than $6 million in synagogue donations for his and others’ personal financial gain, standing at the “epicenter” of many frauds, prosecutors said.

He agreed to pay restitution of perhaps $2.5 million — most of that to the IRS.

Others who pleaded guilty were Bruce Baker, 74, of La Jolla; Bijan Moossazadeh, 63, of San Diego; Yousef Shemirani, 74, of Poway; Alexander Avergoon, 44, of San Diego; and Boris Shkoller, 83, of Del Mar.

Avergoon — a San Diego real estate agent — was indicted in August 2019 on charges including Ponzi schemes from 2010 to 2016, in which he cheated retirement investors out of a total of $12 million. He was apprehended in Latvia and extradited to the United States in November 2019 and has remained in custody since his extradition and initial appearance in federal court.

Baker admitted that his role in the Goldstein scheme began in the 1980s, and made millions of dollars in fictitious donations over the years.

Goldstein communicated in code when he had money available, referring to his cash supplies as “challah” and his supplier as “the baker.” In 2016, Goldstein texted Moossazadeh to tell him he had cash: “I got a call from the Baker today he’s preparing for Friday how many Chalah do you need?”

Moossazadeh answered, “22”—by which he meant, $22,000. The next day, Goldstein followed up: “Good morning[.] The baker came in earlier and has today 22 challa ready for pickup[.] Let me know what time?”

A federal complaint said Goldstein, 58, was involved in a scheme in which donors made large, tax-deductible contributions to the synagogue, then secretly got most of their money back.

Beginning around early 2010 and continuing through October 2018, Goldstein engaged in a conspiracy with several unnamed individuals to “fraudulently obtain hundreds of thousands of dollars for the co-conspirators’ personal use and benefit by using false information and fabricated records to pretend to be eligible for tax deductions, emergency funds, grants or donations and private loans,” the government says.

Prosecutors said that rather than using the purported donations for charitable purposes, the rabbi would secretly funnel approximately 90% of the funds back to the purported donors, with Goldstein keeping about 10% of the money.

“The purported donors would falsely claim to the IRS that 100% of their payments to the Chabad were tax-deductible charitable contributions, thereby reducing their personal income tax obligations, without disclosing Defendant’s kickback of the payments.”

Goldstein — whose November exit from congregation leadership was labeled a retirement but was actually a firing — learned of the investigation in October 2018, long before he rose to prominence in the wake of the shooting. He signed his plea agreement in December 2019.

The rabbi met President Trump in the Rose Garden at the White House for the National Day of Prayer and spoke at the United Nations. He later welcomed Trump at Miramar Naval Air Station in a September visit to San Diego, escorted by Poway Mayor Steve Vaus.

Vaus told Times of San Diego on Tuesday: “When I learned of this matter this morning I was shocked, disappointed and heartbroken for the congregants of Chabad.”

An unsigned statement from Chabad of Poway revealed the congregation launched an internal review several months ago, “following which the rabbi was removed from all of his duties at Chabad of Poway.”

It called the moment a “very painful time for our congregation” as it hailed Rabbi Goldstein for his role following the April shootings.

“Yet we’ve since learned that Rabbi Goldstein violated the law, contradicted what our synagogue stands for and transgressed the very moral and ethical rules of the Torah he taught,” said the statement.

His role with the worldwide organization was terminated, and he was dismissed by Chabad-Lubavitch Headquarters as a representative of the movement.

“We were unable to disclose this at the time so as not to interfere with the U.S. Attorney’s investigation,” the statement said. “Throughout, we have cooperated with law enforcement, who have treated our congregation with respect, dignity and grace.”

The statement added: “How do we reconcile this heartbreaking reality with the good Rabbi Goldstein accomplished during his decades of service? How do we separate his unethical and unlawful behavior from his many positive contributions to our community?

“We will surely struggle with these questions for a long time to come. …. We hope and pray that Rabbi Goldstein finds the professional help that he needs and makes amends to our country and to the people he has hurt. And we pray that the Goldstein family find the healing they so deserve.”

In its own statement, the group said Goldstein “breached the trust vested by the United States in its stewards of charitable organizations, and violated everything that Judaism and our movement stand for.”

It added: “While it is painful to learn about anyone engaging in unlawful activity, that pain is compounded when the person’s life was supposed to be dedicated to sharing the eternal moral code of the Torah and to teaching about our personal responsibility to the Divine ‘Eye that Sees and Ear that Hears.’ That this person is someone who came to widely symbolize faith in G‑d and fortitude in the face of evil is particularly devastating.”

The headquarters said its hearts go out to Goldstein’s former congregants, his family and to the broader Poway community, “all of whom have already experienced more devastation than anyone should ever know. … We commend the law enforcement efforts of the U.S. Attorney’s Office and the sensitivity with which they handled this difficult case.

“We pray for the strength and healing of the Poway Jewish community and the Goldstein family. We stand with you and support you as you once again rebuild the community you hold so dear. As you move forward under new leadership, may your light and inspiration be renewed and shine ever brighter, for the city of Poway, for our nation, and for the world at large.”

Donald Harrison, editor of the online San Diego Jewish World, said Wednesday on Facebook: “It’s a sad day in the San Diego Jewish community. Rabbi Yisroel Goldstein of Chabad of Poway pleaded guilty to tax fraud charges, thereby transforming himself from the hero of the attack on his shul to a common criminal. How disappointed every member of the Jewish community must be.“

Besides Allen, prosecutors on the case were Andrew Young and Oleksandra “Sasha” Johnson.

Goldstein was among three people injured in the April 27, 2019, shooting at the synagogue, which killed 60-year-old congregant Kaye.

The alleged shooter, John T. Earnest, 21, remains in custody on state and federal charges, including allegations that the attack was a hate crime. State prosecutors are seeking the death penalty against Earnest, while the Department of Justice has not yet made a decision regarding capital punishment.