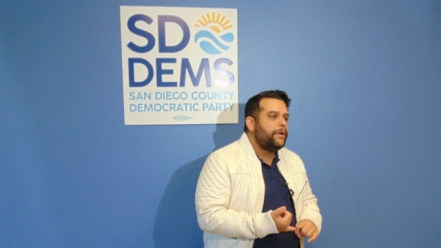 May 7, 2022 (San Diego) - The chair of the San Diego County Democratic Party revealed Friday he will take a leave of absence amid reported allegations of assault.

called the allegations “completely false” but said he would step aside because the local party has “critical work that must continue.”
Rodriguez-Kennedy did not address the specifics of the allegations, but party activist Tasha Williamson took to social media to accuse him of sexual assault.
“The chair of the San Diego Democratic Party needs to tell the party about the allegations against him!” Williamson posted.
Lauren Bier, a member of the party’s central committee, said leadership had been informed of the allegations and is reviewing them.
“I can say only that we have, in fact, been informed of this. It will be going to the committee’s formal process and will be investigated per our procedures,” she said in a social media post.
The matter is also under review by the San Diego County District Attorney’s office, according to media reports.
Rodriguez-Kennedy, who was previously president of the California Young Democrats, was elected party chair in 2019.