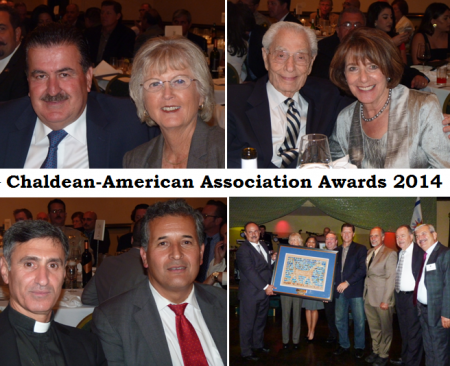 November 13, 2014 (El Cajon ) – With a theme of “together, we can build a better community,” the Chaldean American Association convened at the Crystal Ballroom in El Cajon on October 30th for the organization’s annual awards banquet.

Pastor Harold Brown, Chairman of the East County Transitional Living Center, was honored as El Cajon Person of the Year.

Hani Daymia, president of the Chaldean American Association discussed the plight of Iraqi Christians displaced by ISIS (or ISIL) terrorists and observed that violence against Chaldean Christians has been going on for years, citing chilling details of priests and parishioners massacred by terrorists inside a church several years ago, and of an archbishop whose body was dumped in garbage.  “Who took responsibility back then? The Islamic State,” he said.  The world did not take action then, and now the same terrorist group has wreaked havoc on a far broader scale.

He also showed a slide show of housing for refugees built with donations from a fundraiser held here in El Cajon.  Over $615,000 has been distributed to homeless Iraqi refugees in Iraq, Turkey and Lebanon.  But more help is needed, with winter coming soon.

“Together we can have a better El Cajon. This is our city and together we can do the best we can for the city,” said Barka, who spoke about the pressures on the city from a growing number of refugees forced to flee their homes in Iraq. “It is a sad situation for our people,” he said, showing slides of an 1,800 church burned by ISIS.” 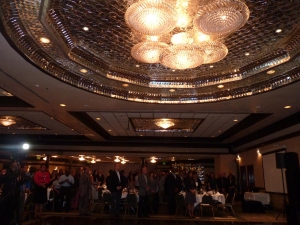 To the members of Congress present, he said, “We thank you for your help, for your support.”  Congressman Vargas, who introduced a measure to lift the cap on persecuted Iraqi refugees, received a standing ovation from the large crowd present.

“You are a man of honor,” Barka told Vargas, recalling how he helped over a decade ago. “With your help we were able to bring over 800 families that were detained in TJ [Tijuana] here.”

Congressman Vargas said he just returned from Baghdad, where he met with priests in Erbil.  “The Christians there are in fact undergoing genocide…and we have to do something about it. They are our brothers and our sisters. They are your brothers and your sisters. You can’t allow them to die like that or to live like that. It’s incumbent on each and every one of us to do everything we can to help them,” he stated.  “These people are crying out for help and we can help them and we must help them..Susan Davis and I are working very hard to pass a bill that will let them quickly come here as refugees.”

But he added that currently it’s hard to move anyone out because the U.S. embassy has moved staff out.  He said he went to Iraq to beg the State Department to move staff back into process refugees and get 30,000 out who could be taken out safely.  He said he offered to get on his knees and beg, but the Ambassador agreed to write the letter and help restart the processing of refugees.  “I told the ambassador that every single person who comes here will have a home. I know that you will open up your homes.”

Congresswoman Davis stated, “Hope is the most important thing that we can give.”

Assemblyman Jones and Supervisor Jacob praised Pastor Brown, recipient of the Citizen of the Year award, for his efforts to end chronic homelessness at the East County Transitional Living Center, a nonprofit organization.  Jacob said she has had people helped by Brown’s center work on her own ranch in Jamul.  “He is a working CEO who gets down in the dirt” she said, adding that he works miracles in turning lives around.

Brown, who was once on the streets himself, took an infested motel and turned it into a haven to help the homeless turn their lives around with transitional and emergency housing, job skills development, opportunities to earn a GED, case management and help finding other resources, as well as biblical training for those who seek it.

“I want to make a difference in their lives,” Brown said. “God brought us together for a purpose…I know that in a couple of years, we will have success stories of Chaldean refugees.”  Brown also received a Lion of Babylon work of art in recognition of his efforts.

Also present, seated next to Rep. Vargas, was Father Noel, one of nine American priests who has been ordered back to  Iraq by the head of the 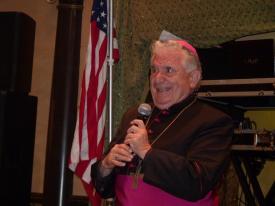 Chaldean church in Iraq.  That order has been appealed to Pope Francis.

“These so-called Christian parliamentarians do not represent us,” Hani Daymia, president of the Chaldean American Association stated. “This man represents us,” he said of Bishop Jammo. He also thanked Mark Arabo, head of the Neighborhood Market Association and a national spokesman for Chaldean Christians in the U.S., for his efforts in Washington and at the United Nations to bring help for the Chaldean people.

Bishop Jammo (photo, left) denounced the persecution of Christians in Iraq. “We need to save the children who are dying,” he implored.  He called for building a “tower that will reach heaven” by working together.