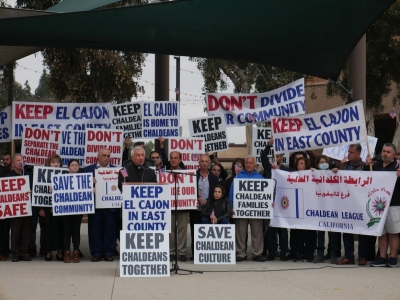 Story and photos by Elijah McKee

December 8, 2021 (El Cajon) — “Our community is under threat again. This time, it's right here in the United States,” said Vince Kattoula, a Chaldean activist, at the Keep East County United rally and press conference on Tuesday.

Chaldean Americans have found a home in and around El Cajon for over 50 years — but what has been built over this half century by generations of people is now on the line, as county redistricting is putting their unified voice at risk of being fractured.

The event, held at El Cajon’s Centennial Plaza, was a rapid response to the Independent Redistricting Committee (IRC) releasing their proposed maps for Supervisorial districts, which are scheduled to be finalized on December 14. Groups of people like Chaldeans are supposed to be kept together in county districts, designated as “communities of interest” since they are not formally counted by the Census Bureau. Yet the newly proposed maps currently split large chunks of this community away from each other.

El Cajon would be lumped in with the Hillcrest, Clairemont Mesa and North Park neighborhoods of district four. Meanwhile, Rancho San Diego, which is in the unincorporated part of El Cajon, would get separated into district two along with Lakeside, Santee, and Alpine.

Many local leaders and community members turned out to voice their concern with the changes, surrounding the podium with banners and signs.

“We believe this is a politically motivated map, to diminish our voice as an ethnic minority,” said Dr. Noori Barka, President of the Chaldean Community Council. “We ask for a fair map,” he continued. “El Cajon is our heart and we cannot live without it.”

Barka reminded the crowd that this area is now home to the largest number of Chaldean Christians in the world at over 50,000 people. Coming to the United States from their Iraq homeland due to religious persecution and economic hardship, they maintain a tightly knit community across families, schools, and local governments in East County.

Those who spoke also included the Cajon Valley school board president, a Chaldean Bishop, El Cajon community activists, and Bill Wells, the Mayor of El Cajon. 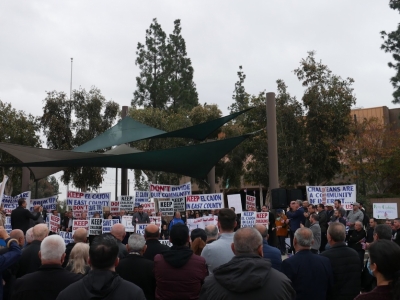 “They’re trying to destroy this area’s ability to govern themselves,” said Wells. “What is happening with the redistricting committee is pure and simple identity politics. And I’m here to tell you something, and the IRC should know this: it is against the law to make decisions on redistricting based upon political will.”

Indeed, both Kattoula and Konja made clear that Keep East County United has retained legal counsel, and that while they hope it is not necessary, further steps toward litigation will be taken in the event that the current ma

The committee’s decisions are pivotal for the Chaldean community, but as several speakers acknowledged, they also matter for all of East County if the area wants to remain a cohesive region.

“East County is incredible,” said Rick Wilson, President and CEO of the East County Chamber of Commerce. “The synergies that have been created over years with the surrounding cities and unincorporated areas have been immense and we don’t want to lose that.”

The IRC meets this Thursday at 5:30 p.m. at the County Administration Center in downtown San Diego to consider the draft maps, and Keep East County United will be helping transport Chaldeans to the scene to make their voice heard. To submit a request to speak at the meeting, click here, and to submit a virtual comment, click here. More information on redistricting in San Diego County can be found here.

As the rally came to a close, a chant grew and grew until the entire crowd was heard echoing around the plaza: “Hear our voice! Save El Cajon! Keep Chaldeans in East County!”