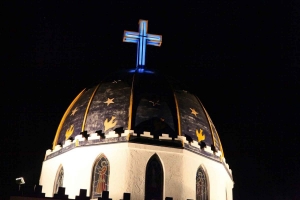 January 18, 2015 (El Cajon)—Chaldean Church Patriarch Louis Sako has issued a statement published in an Arabic language publication indicating that he refuses to recognize the authority of Pope Francis.

Earlier this month, Pope Francis informed St. Peter’s Cathedral in El Cajon that he had granted their request and overturned a decree by Sako, who last October had ordered about ten priests in the U.S. to return to Iraq, including Father Noel Gorgis at St. Peter’s.

St. Peter’s had appealed Sako’s decision to the Pope, contending that the order amounted to suicide for the priests, since ISIS terrorists are murdering priests in Iraq.  Sako had indicated that priests who refused his order would be stripped of the priesthood.

But now the Arabic publication Aleteia has reportedly published a statement from Patriarch Sako in which he claims authority over the Chaldean Church of San Diego, effectively defying the papal order.

"We have been there for 2,000 years," he said of Iraq. "We have a mission and a role, and if a future exists for the Chaldean Church, it is not in the diaspora but in Iraq. If all the families leave, and even the priests, the entire history and Chaldean Christian patrimony will vanish."

Sako implies that the Pope’s decree is inapplicable and faults Bishop Sarhad Jammo for the appeal, stating that the “priests are not his” and warns believers “not to be dragged into the actions” of the Bishop.

​"We recognize the Pope's decision to be true and overarching,” Arabo said. “Any statement by a lesser authority cannot be recognized. The Pope decision is not simply a solution, it is the only solution. We look forward to seeing Father Noel every Sunday from here on out."

Ferrez says: "10News spoke with Father Noel Gorgis in October about his fears of returning home.“To tell me go back to Iraq, it really is to make to tell me go and have suicide,” Gorgis said at the time." First of all, your Bishop is not asking you to commit the sin of suicide, he needs help to minister the Sacraments to the faithful and to hold daily mass to give them Eucharist.There are towns outside Mosul such as Eril and Tall Kayf with many Catholic Christians, why would the Bishop put you in harms way when he desperately is in need? The courage to die for Christ of which you so glaringly lack is called-------Martyrdom! St. Augustine exclaims: "O how sweet it is to die, if one's life has been a good one!" For such as he, "to die is gain." I heard a story about St. Peter leaving Rome at the urging of the Christian's because they feared for his life, so as he was leaving Rome he meets the Lord on the road going to Rome and Peter asks, "Lord where are you going and Jesus says I'm going to Rome to preach the Gospel," at that Perter realizes his mistake and turns back to Rome. Fr. Gorgis turn back! I have read the protests and comments given by the Chaldean church in El Cajon, their worldly comments do not reflect the overall mission of the Church and the sacred vows priests take at their ordination.