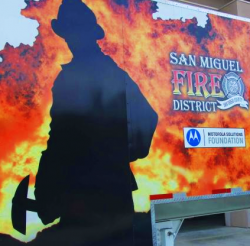 November 5, 2014 (San Diego's East County) -- The biggest political upset in East County this electionappears to have taken place in the San Miguel Fire District, where a slate of challengers has won three seats on the board, ousting incumbents.

Incumbent Rick Augustine was close behind McKenna wtih 15.94%, trailing by just 73 votes, followed by board members Chris Winter at 12.88% and Jeffrey Lyle Nelson at 9.28%. Cindy Croucher, wife of former Fire Chief Croucher, came in last with 7.12%.

The hottest point of contention was over the district's partnership with CAL FIRE to run firefighting operations. The move came after budget woes and enabled the district to reopen a closed fire station on Dehesa Road.

CAL FIRE and incumbents claimed the partnership had led to other improvements and was the best option for the district. But challengers contended that some aspects of public safety had been compromised and argued for more local control.

I just wanted to point out a little hiccup in your article. The slate of challengers (Vacio/Ek/McKenna) were NOT backed by any Union. Incumbents Chris Winter and Augustine, and Cindy Croucher were the ones backed by the CalFire Union.