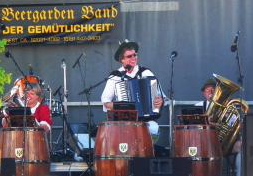 July 14, 2015 (La Mesa) – The La Mesa Chamber of Commerce has partnered with Grossmont Center and the Cushman family, to submit a Special Events application to the City for a beer garden event October 16 – 17.

Describing it as “family-friendly,” the application proposes live music, 4-5 food vendors and 3-4 sponsor tables, to be held in the parking area where Hooley Fest has been held in the past.

“The Chamber feels very fortunate to be partnering with the Cushman family and their management team, a business that has a great brand, and a long history in La Mesa. This is the beginning of a great relationship with Grossmont Center,” said Chamber CEO Mary England.

From 2008-2014 the Chamber has run a beer garden at the Oktoberfest, and their new event application reflects back on this; “…the La Mesa Chamber of Commerce has provided countless jobs annually for vendors providing goods and services, allowed non profit groups to raise funds for their worthy causes by participating in our event, along with hiring many individuals and groups to assist in the execution of the Chamber’s smooth running Allison Street beer garden.”

“The same management style, safety and work ethic will be utilized… in this new location, providing a family-friendly activity that enhances Grossmont Center as a destination for fun-filled activities,” the application states.

It is not clear at this time whether there will be an Oktoberfest 2015 in the Village.

In May the La Mesa Village Merchants Association filed an application in which they would also take over the Allison Avenue beer garden. Instead, however, an unpaid debt to the City of $37,229 for Oktoberfest 2014 triggered a lecture from City Council and special event policy change that sent them back to the drawing board until an acceptable repayment plan can be agreed upon.

On June 25 the Merchants Association gave the city a cashiers check for $15,000 with a second application for a reduced Oktoberfest on the east side of Spring Street only. With $22,229 still outstanding; the application has not been accepted by the City yet when ECM inquired last week. With the clock ticking the Merchants Association sent letters to all past vendors and began collecting money for booth rentals, but told ECM that they will not cash vendor checks before the City issues a permit for Oktoberfest 2015.

ECM left messages with Oktoberfest organizer John Vigil and Merchants Association President Arline Moore for comments, but has not received any response.

Update: On Weds, July 15 the City confirmed that as of yet, no repayment plan has been agreed upon or permit issued to the La Mesa Village Merchants Association for Oktoberfest 2015, and is scheduled for the July 28 City Council agenda for further discussion.

I my opinion it's going to take a whole lot for the La Mesa Oktoberfest to come back. The Oktoberfest in El Cajon at the German club is a far better event. The band is German (from Germany) they have real German Beer and real German food. Right now my money is on El Cajon to get better and same olde with La Mesa.
Good for the Merchant's Association ! A return to the "original" La Mesa Oktoberfest ...an event with German Bands, German folk dancers, German food, and German beer. I join the many who are pleased the Chamber is taking their garage band street fair elsewhere. I have a vested interest in keeping the Oktoberfest "echt Deutsch".
Think about it. The City incurs a lot of costs and liabilities during the Oktoberfest. I would be wondering where the Merchants came up with what they finally did partially pay the City for last year if I were one of those Vendors who prepaid already for this year. Yikes!

For 22K you are going to cancel October Fest? I bet if Art was still in charge this would not happen. Since when are Cities profit centers? I guess since all our taxes go to salaries and pensions. Nothing left for services.

My money's on the new Mayor to be tapping the keg on opening night at the ORIGINAL La Mesa Oktoberfest in La Mesa.