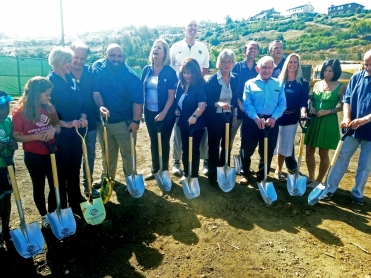 Officially the 26,000-square foot clubhouse will be called Brady Family Clubhouse and Gagnon Academy featuring the Bill Walton Gymnasium.  Walton was born and raised in La Mesa and is a Helix Highlander, as graduates of the high school here are called.

Lakeside resident Kianna Smoot, 10, was attending this ceremony as a current Boys & Girls Club member in Lakeside. She had this to say about her Boys & Girls Club experience: “I think of it as a fun way to meet friends and have fun.”

Brandie Warren, the director of the Lakeside club added “It’s pretty amazing to see the beginning stages of this club.”

Maggie Eggers, who grew up down the street from Walton, shared this anecdote about him with ECM. “When he was a kid, he would walk up and down Colorado Avenue with his basketball on his way to Sunset Park to shoot basketballs.”  Eggers works for EDCO Disposal now and watched her big boss at EDCO, Steve South, campaign chairman, dedicate in part his two- minute speech to the “tall Highlander” at this event, Walton. The Walton gymnasium and clubhouse is slated to be completed in 2018. 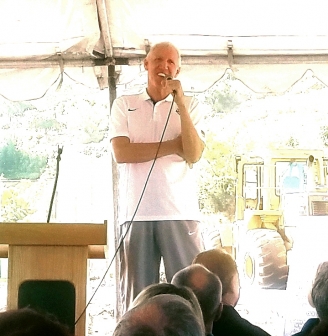 Walton, right, in his speech to the estimated 100 attendees, graciously acknowledged his mother, Gloria Anne Walton, his wife Lori, and thanked the many involved in creating this clubhouse. Anecdotes about friendship, his experiences as a youth in La Mesa, and inspirational words about his dreams and the importance of having dreams. “This is the site where all of my dreams germinated,” the famed athlete said, and ended with “Without dreams we have nothing.”

Supervisor Dianne Jacob good naturedly quipped, “Thanks a lot for putting me after Bill Walton on the program,” but also passed along well wishes and noted this was a momentous occasion.  Other speakers additionally added their perspectives and celebratory remarks.

Friend of major donor Eleni Gagon, Kathy Aylott with the California Bank & Trust of Rancho San Diego, relayed the inspirational story of Gagon’s life story.  Particularly inspirational in that when Eleni left home as an 18-year-old girl, her father told her to not come back.  Eleni eventually went on to marry Wolfgang Gagnon and build a real estate fortune that enabled her, via the Eleni and Gagnon estate, to contribute $3 million and have the academy section in the clubhouse named Gagnon Academy.

Ronald and Mary Alice Brady, guests of honor who contributed $3 million, received a standing ovation from the attendees. Ronald Brady who called the site “this magic location” and in turn, thanked other donors, also noting the importance of what the clubhouse will mean to the community.

Master of Ceremonies Steve Hamann ended the program, noting there are 10-11 months to completion. Then he asked dignitaries to find a designated shovel for the ground-breaking portion and for attendees to enjoy refreshments.  Continental Catering provided open face salmon sandwiches, quesadillas, quiches, cucumber water and more.

For more information about the La Mesa Capital Campaign of the Boys & Girls Clubs of East County Foundation, contact Candy@bgcec.org. So far, $8.5 million has been raised with a goal of raising another $1 million.