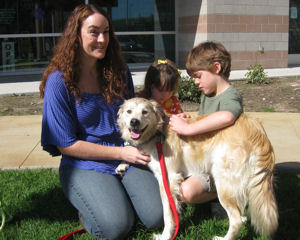 45 Families Wanted to Give Him a Home
March 29, 2012 (San Diego) -- He was renamed Chance hoping that he would have a second opportunity at life. He survived his gun-shot wounds and  now Chance, a retriever mix, got to go home to a new bed, new toys, and new family.

A total of 45 families submitted applications to become Chance’s adopted parents but he is now with the Cavanaughs from North Park in San Diego.

“A lot of qualified families wanted him,” said Lt. Dan DeSousa, from the County Department of Animal Services (DAS). “But we chose the one we think is the best one for Chance.”
After interacting with several families, Chance went home with Sean and Adria Cavanaugh and their two small children Finn, age 6, and Molly, 3.
“It’s such a good feeling because he clicked with us,” Sean told the frenzy of media that showed up for Chance’s goodbye from the County’s animal shelter in Carlsbad. “He is such a good dog he would have clicked with anyone.”
Chance’s story touched the hearts of people from throughout the County. On Feb. 20, a Good Samaritan contacted DAS after finding a dog that had been shot through the chest on the Viejas Indian Reservation. Animal Control Officer Gina Raygosa responded and immediately transported the dog to the VCA Emergency Animal Hospital in Mission Valley.
The dog, renamed Chance by shelter staff, was in critical condition for several days and his life hung in the balance. After being kept in an oxygen chamber for five days to help with his damaged lungs, Chance was released to the care of the veterinary staff at Animal Services.

Throughout the ordeal and due to the amount of media attention, Chance’s owner came forward but she decided to surrender the dog because she was concerned for his welfare. She was worried that whoever shot the dog would try again if she took him home.
Chance’s care was paid by the Spirit Fund, established by DAS in 2008 to help animals get care above and beyond that which can be provided by the shelters. 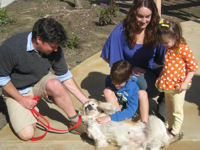 The Cavanaughs lost their golden retriever one year ago and had been looking for another dog until Chance’s tragic story caught their attention, especially Adria’s, who submitted an application without telling the rest of the family at first.
“His story is sad but sweet. We are thrilled. We did not think we were going to get him,” said Adria, adding that the family is grateful for the Spirit Fund because it helped to save Chance’s life.”
While at the shelter, Chance’s star continued to shine, making many of the staff also fall in love with him. Together with volunteers they made a video about Chance’s doggie shenanigans. The Cavanaughs said they are convinced Chance will continue to be a star in their community and indicated they might create a website so that his former owner and other people can continue to monitor his progress.
Chance’s prognosis is excellent and while there is likely to be some scar tissue, his lungs are healing nicely. He does have one small challenge ahead, which given his personality he is likely to conquer easily: He still needs to be potty trained.

For more information about DAS and the many pets available for adoption at the County’s three shelters, visit www.sddac.com