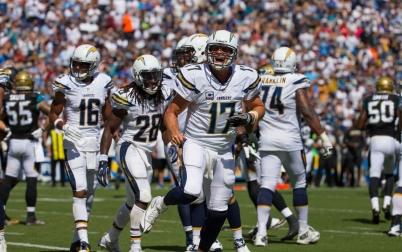 September 19, 2016 (San Diego) - After a shocking loss last week in Kansas City, the Chargers came back home to take on the Jacksonville Jaguars. 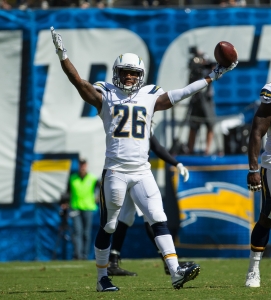 This week, though, everything seemed to be clicking for the Chargers from the first drive of the game.  After big runs from Melvin Gordon and Danny Woodhead, Gordon finished the job by barreling through to the end zone.  7-0 Chargers after the extra point. 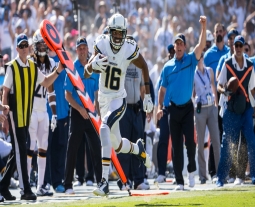 Even though the Chargers lost Woodhead to an injury late in the first quarter, that didn’t slow down their offense.  In the second, Philip Rivers threw a short toss to Travis Benjamin and it was 14-0 Chargers with the PAT.  With 10 minutes left in the half, Rivers went to his classic go-to man, Antonio Gates, for the Bolts’ third touchdown of the half and the 105th touchdown reception of Gates’ career.  The PAT went through and it was 21-0 Chargers at the half. 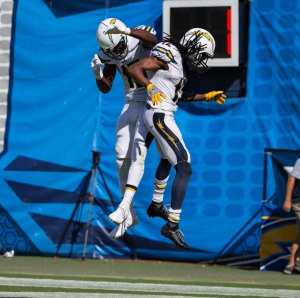 In the third quarter, the Bolts didn’t stop.  Rivers looped it to Tyrell Williams who made a few moves, broke some tackles and got the 44-yard touchdown.  28-0 Chargers after the PAT.  Late in the third, Rivers aired it long for a 45-yard pass to Benjamin and the Chargers scored ANOTHER Bolts touchdown, their fourth of the day.  35-0 Chargers with the PAT.

The Jags got on the board in the fourth with a short pass from Blake Bortles to Marcedes Lewis and the Chargers still led 35-7.  With seven minutes left in the game, Josh Lambo added three points with a field goal and the Chargers led 38-7.  At the end of the fourth, the Jags added one more to make the final score 38-14 Chargers.  The Bolts go to 1-1 on the season.  They’ll travel to Indianapolis to take on the Colts on Sunday.

In other news, the Chargers placed Woodhead (knee) on “Reserve-Injured,” the team announced Monday.

Woodhead, who helped set up the team’s first touchdown of the game with a 23-yard run to Jacksonville’s three, scored a touchdown in the Chargers’ Sept. 11 season opener in Kansas City.

This is the second time Woodhead has been placed on Reserve-Injured. In 2014, he was placed on the IR list after suffering a broken ankle during the Chargers’ Week 3 game in Buffalo.

Woodhead will be replaced on the active roster by former Indianapolis Colts wide receiver Griff Whalen. A former undrafted free agent out of Stanford, Whalen spent four seasons with the Colts. He spent his rookie season in 2012 on injured-reserve but came back to play in 33 games with three starts during the 2013-15 campaigns. His career totals include 45 catches for 487 yards (10.8 avg.) with three touchdowns.

Whalen has some postseason experience as well. He played in two playoff games for the Colts in 2013, catching seven passes for 93 yards.

Whalen is a native of Sylvania, Ohio. He will wear No. 83 for the Chargers.