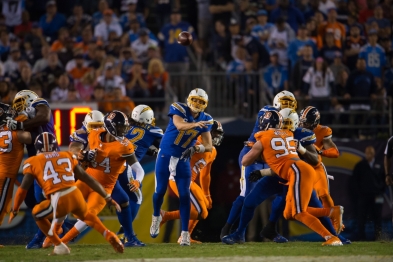 October 14, 2016 (San Diego) - The Chargers had Thursday Night Football this week as they hosted their AFC West rival Denver Broncos.

It carried the same tune as the first five weeks.  The Chargers marched downfield in the first quarter after a few penalties and the rookie from Arkansas, Hunter Henry, made the short catch in the endzone and the Chargers took a 7-0 lead after the extra point.

Josh Lambo added three more in the second with a short kick from 27 yards and the Bolts led 10-0.  The Broncos got on the board with Brandon McManus’ 29-yard field goal.  The Chargers still led 10-3 at the half. 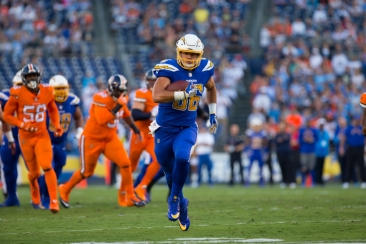 In the fourth, after a punt placed the Broncos in their own redzone, a holding penalty that put them in the endzone gave the Chargers a safety and the lead was 21-3.  The Broncos got into double digits with eight minutes left when Trevor Siemian gunned a pass to Bennie Fowler at the goal line and he took it to the house.  The Chargers still led 21-10 after the PAT. McManus added three more, but the Chargers hung on to win 21-13.   The Bolts are now 2-4 while the Broncos are the exact opposite, 4-2 and their road win streak has been snapped.

The Bolts return to action on Sunday when they travel to Atlanta to take on the Falcons.  Kickoff is at 1:05 p.m.