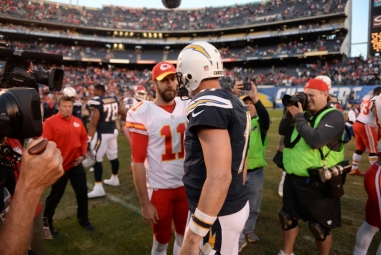 January 1, 2017 (San Diego) - In potentially their last game in San Diego, the Chargers squared off against the team they lost to in overtime in week one, the Kansas City Chiefs, on Sunday.

Josh Lambo kicked a field goal in the first quarter for the Chargers to take a 3-0 lead. Chiefs kicker Cairo Santos tied the game with a field goal of his own and the score was 3-3. 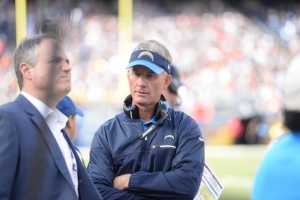 The Chargers reclaimed the lead in the second with Philip Rivers’ pass to Antonio Gates and the lead was 10-3.  The Chiefs got that one back easily.  After a big gain on a pass play to Albert Wilson, quarterback Alex Smith ran it in himself to tie the game at 10.  Kansas City took their first lead with six minutes left with an easy little pass from Smith to Charcandrick West for the touchdown.  Kansas City led 17-10.  They added three more and went to the locker room up 20-10.

In the second half, the Chargers struck back in a big way.  An interception by Jahleel Addae returned for a 90-yard pick six brought the Chargers back to within three at 20-17.  Smith found West again, however, and the Chiefs were back up by 10, 27-17.  The Chargers thought that was bad enough, but Tyreek Hill made it worse with a 95-yard punt return for a touchdown and a 34-17 Kansas City lead. 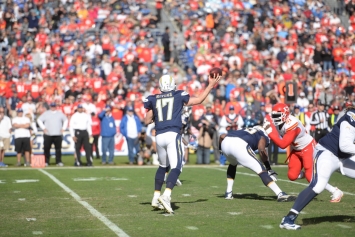 The Chargers added three to make the score 34-20 in the fourth.  A field goal gave Kansas City a 37-20 lead.  The Chargers gave it one last hurrah with a touchdown pass from Rivers to Hunter Henry, but the Chiefs ultimately won what was potentially the Chargers’ last game in San Diego 37-27.

In other news, the Chargers have fired head coach Mike McCoy.

“Mike McCoy is a man of high character, and we thank him for his dedication to the Chargers,” said Chargers President of Football Operations John Spanos.  “The decision to dismiss Mike was made in the best interests of our franchise.  Our team’s disappointing performance has not matched this team’s potential and has fallen short of the demanding standards that we seek to impose throughout our organization.  Our comprehensive search for a new head coach begins immediately.”

“I want to thank Mike for his tireless work and commitment to this organization,” said General Manager Tom Telesco.  “He instilled a culture of work ethic and togetherness that we can build on for years to come.”