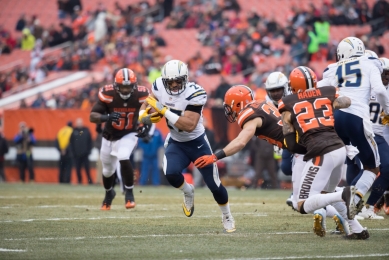 December 26, 2016 (Cleveland) - The Chargers traveled to Cleveland on Christmas Eve, where they met a Browns team that was 0-14 and hungry for its first win of the season.

Philip Rivers and the Chargers were determined not to let that happen.  In the first, he threw a one yarder to Antonio Gates for the touchdown and the Bolts were up 7-0.  The Browns got on the board with Isaiah Crowell’s eight yard touchdown run to tie the game at seven, but Josh Lambo kicked a field goal to give the Chargers the lead again, 10-7. 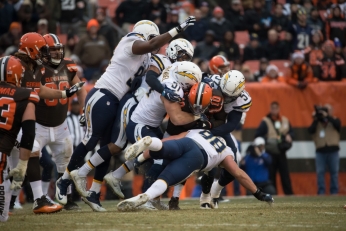 In the second, the Browns took their first lead of the game on a six yard run by Crowell and Cleveland took a 14-10 lead.  Cody Parkey added to the lead with a 49-yard field goal to give the Browns a 17-10 lead at the half.

In the third, Parkey added three more and the Browns were up by 10, 20-10.  But Tyrell Williams brought the Chargers back to within three points with a one-yard touchdown reception and the Browns led 20-17.

It all came down to the wire in the fourth quarter.  After getting into field goal range, the Chargers rushed the field goal unit onto the field and got the snap off with two seconds left, but Lambo’s kick was wide right and the Chargers gave the Browns the best Christmas present a struggling football team could ever ask for:  their first win of the season to go to 1-14.  The Bolts fall to 5-10.

The Chargers’ last game of the season--and possibly their last in San Diego--will be on New Year’s Day against the Kansas City Chiefs at Qualcomm.  Kickoff is at 1:25 p.m.