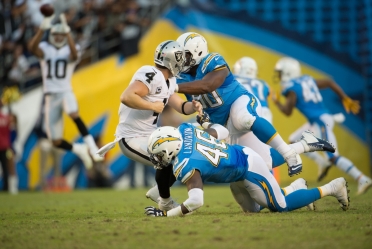 December 19, 2016 (San Diego) - The rival Oakland Raiders came to Qualcomm Stadium on Sunday and like every time the Chargers and Raiders square off, it was a good one.

Despite the Chargers being eliminated from playoff contention with the Dolphins’ win on Saturday night, they still went out and competed.

In the first quarter, Philip Rivers threw 47 yards to Travis Benjamin for a 7-0 lead.  Sebastian Janikowski kicked a 45-yard field goal to get the Raiders on the board.  The Chargers led 7-3.

In the second, Josh Lambo kicked a 35-yard field goal to make the score 10-3, but Derek Carr threw a 29-yard pass to Michael Crabtree to tie the game at 10 at the half.

Oakland took a 13-10 lead in the third on a field goal from Janikowski.  But the Chargers retook the lead on a touchdown pass to Hunter Henry and the lead was 16-13 after a missed extra point.

The fourth quarter Chargers returned when Kenneth Farrow fumbled the ball and it was recovered by the Raiders, but the Chargers defense held them to a field goal to tie the game at 16.  The Raiders took the lead on a field goal and the score was 19-16.  Rivers threw his usual game-ending fourth quarter interception and the Raiders clinched a playoff berth for the first time since 2002 with a close 19-16 win.

The Bolts travel to Cleveland for a Christmas Eve matchup against the Browns.  Kickoff is at 10:00 a.m.