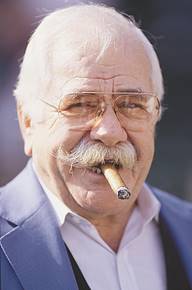 Pernicano was one of the five original San Diego Chargers minority owners who purchased interest in the team in 1963.  He helped Jack Murphy and other prominent San Diegans convince Barron Hilton, the owner of the Los Angeles Chargers, to bring the team to San Diego in 1961.


“George was more than a Chargers icon; he was a San Diego institution,” said Chargers Owner-Chairman Dean Spanos.  “Everyone in NFL circles loved George and he loved being around the team and the players.  He was always upbeat and fiercely proud of this team and his handle-bar mustache was famous as his calling card around the NFL.

“Our hearts go out to his family and everyone that had the good fortune to know George.  He will be missed.”

He was inducted into the Chargers Hall of Fame on Sept 8, 1996.  While his health permitted, he attended every game except for two road games.

Born in Punxsutawney, Pennsylvania, into an Italian family of 11 boys and one girl, he served in the Army Air Corps during World War II before he and his wife Belle moved to San Diego in 1946 and opened their first of what would soon become a San Diego institution: Pernicano’s Restaurants and his famous pizza.