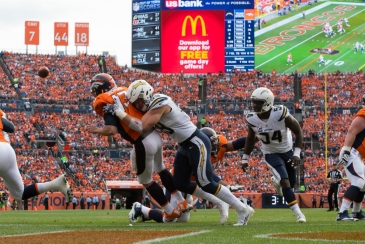 November 1, 2016 (Denver) - On Halloween eve, the Chargers came face to face with something scary indeed: their AFC West rival, the Denver Broncos.

Denver took the lead early on a 28-yard Brandon McManus field goal to go up 3-0.

But the Chargers came right back when Phillip Rivers threw a seven yard touchdown pass to Antonio Gates and the Bolts went up 7-3 after the extra point. 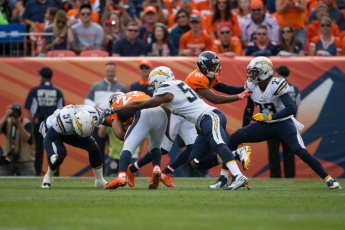 But in the second, the Broncos scored a touchdown on a pick six by Bradley Roby and the home team went up 10-7 at the half.

In the second half, Devontae Booker added onto Denver’s lead with a six yard touchdown run to make the score 17-7.

The Bolts will have two straight games at home, starting next week against the Tennessee Titans.  Kickoff is at 1:25 p.m.