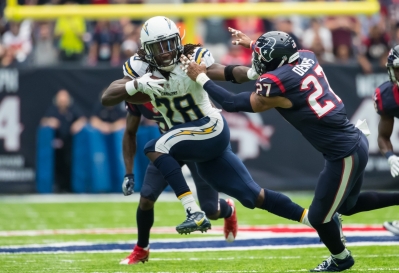 November 28, 2016 (Houston) - After their bye week, the Chargers traveled to Houston to face the Texans in an early (for us) game.

After another rare scoreless first quarter, the Texans scored first in the second when quarterback Brock Osweiler kept it and ran in for the score.  7-0 Houston.  But that wasn't a big deal for Philip Rivers. He aired it long to Dontrelle Inman and the Chargers tied the game at seven.  From then on, it was all San Diego.  After an interception, Rivers used his arm again and Tyrell Williams made the catch in the end zone and the Bolts were up 14-7 at the half. 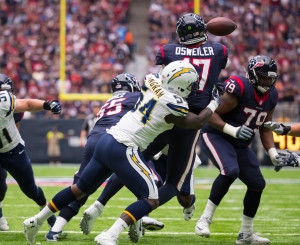 The third quarter was scoreless, making this the first game all season that the Chargers have had a scoreless first and third quarter.

In the fourth, the Texans got to within four with Nick Novak’s field goal, but Rivers connected with rookie tight end Hunter Henry for seven more and the Chargers won this one 21-10 and move to 5-6.  The Texans go to 6-5.

Next week, the Bolts are home and will welcome the Tampa Bay Buccaneers.  Kickoff is at 1:25 p.m.