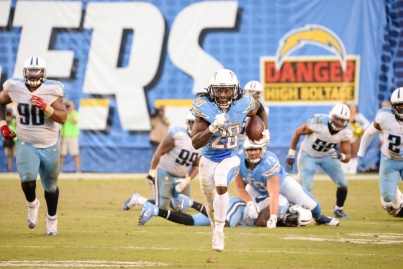 November 6, 2016 (San Diego) - The Chargers returned home on Sunday to take on the Tennessee Titans.

Right away on the game’s opening drive, the Chargers marched downfield to the endzone and Philip Rivers tossed a short pass to Antonio Gates for the score.  Josh Lambo missed the extra point and it was 6-0 Chargers.  Josh Lambo tried another field goal and this time, it went through and the Bolts went up 9-0.

In the second quarter, after Melvin Gordon found a hole for a big gain and a 1st and goal, Tyrell Williams made the catch in the endzone and the Chargers scored again.  This time, the PAT was good and the Chargers led 16-0.  The Titans got on the board with Marcus Mariota’s bullet pass to Rishard Matthews in the endzone for the touchdown.  The PAT was good and the Chargers led 16-7.  Lambo added a field goal and made the score 19-7.  Just before the half, Mariota showed everyone what he was so good at when he was at Oregon.  He passed his way down the field and fired another endzone strike to Matthews and the halftime score was 19-14 Chargers after the extra point.

In the second half, the Titans picked up where they left off with Mariota’s run into the endzone for the score.  The extra point was good and the Titans took their first lead of the game, 21-19.  But the Chargers retook the lead on a 1st and goal run by Melvin Gordon on what would’ve been a fourth down, but a penalty was called on the Titans to make it 1st and goal.  The PAT was good and the Chargers led 26-21.  They expanded on that lead when Mariota fumbled the ball thanks to a hit by Melvin Ingram and Dwight Lowery picked the ball up and returned it for a 41-yard touchdown.  33-21 Bolts after the extra point. 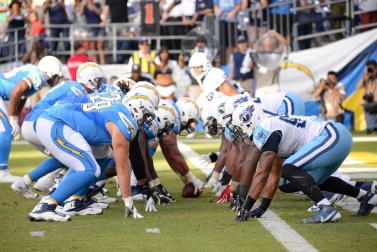 In the fourth quarter, it looked like the Chargers were going to have another fourth quarter collapse. Mariota threw another touchdown pass, this time to Delanie Walker and the Titans were within five after the extra point made the score 33-28 Chargers.  But Lambo avoided danger by adding a field goal and made the score 36-28.  Mariota tried to work his magic again, but Brandon Flowers picked it off and returned it for a pick six to give the Chargers a sure lead, 43-28.  The Titans came back on a one-yard run by DeMarco Murray that made the score 43-35.  But the Chargers were able to hold on and get the win.  Both teams are now at 4-5.

The Bolts will stay home and take on the Miami Dolphins this week.  Kickoff is at 1:05 p.m.

Waive tackle Tyreek Burwell and place kick returner/running back Dexter McCluster on the reserve:  non-football injury list due to a fractured forearm