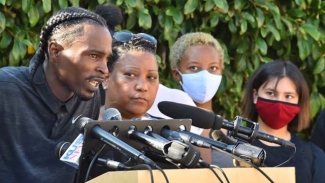 Incident sparked protest May 30 that ended in riot

By Kendra Sitton and Miriam Raftery

June 6, 2020 (La Mesa) - The La Mesa Police Department has dropped charges against Amaurie Johnson, a black man whose controversial arrest was captured in a viral video last week.  Demostrations last Saturday at the LMPD headquarters protested the arrest of Johnson as well as the death of George Floyd at the hands of a Minneapolis police officer.

La Mesa Chief of Police Walt Vasquez announced yesterday that "after a full review of all of the evidence in the criminal investigation" against Johnson, the police department will not seek prosecution "on any of the alleged misdemeanor charges."

The announcement follows release of body cam footage released June 3 showing the interactions between Johnson, 23, and La Mesa Police Officer Matt Dages near the Grossmont Trolley Station on Wednesday, May 27.  That footage does not support the officer’s version of events but does show Dages pushing Johnson and grabbing his shirt.

Johnson had been arrested for assaulting an officer and resisting arrest, which he denied.

The earlier viral video, a brief excerpt of the incident, led to accusations of racial profiling by La Mesa Police and raised questions over excessive use of force by the officer, seen pushing Johnson into a seated position.

Police released body camera footage from multiple officers on Wednesday. The new footage shows Dages talking to Johnson while Johnson is waiting for his friends. When Johnson’s friends arrive, he stands up to leave and Dages grabs his shirt to bring him back. Dages then grabs his neck and arm to push him down to the bench.

The video does not show Johnson assaulting Dages, as the officer claimed, though Johnson does bring his arm up at one point and appears to briefly touch Dages in a defensive gesture while Dages is grabbing him. Johnson repeatedly and heatedly objects.

Other officers eventually surround Johnson and help Dages handcuff him. Johnson accuses officers of arresting him because he is black and insists “I did nothing wrong.”

The body cam videos also show Dages being transported to the police station while a witness gives a statement to other officers at the transit center.

The first 30 seconds of Dages’ body cam footage is muted; Dages turned the body cam footage on after he was already speaking to Johnson. La Mesa Police Department Chief Walt Vasquez said this is how all body cam footage works. Other local police agencies have similar procedures.

The police have provided no evidence of what prompted Dages to stop Johnson to begin with.  Vasquez has said that Dages initially approached Johnson on suspicion of smoking in public. Johnson is not seen smoking in the body cam footage and had no smoking paraphernalia on him when searched. Johnson was not charged with smoking in public.

The new footage does not differ widely from what was already filmed by Johnson’s friends.

“Pretty much what you see is what you get from the video that you saw online,” Johnson said in a press conference after the release of the footage.

Still, some of the footage was revealing. Many questioned why six officers ultimately responded to the scene.

“I just got here because we heard screaming in the police radio. We thought something bad was going down,” Officer Goddard told Johnson’s friends after he was taken away.

Another interesting aspect is the account given by a third-party witness who was present from the beginning. She explained hearing Dages approach Johnson and question him about where he was going. Johnson offered to wait on the platform and Dages had him call his friends. At that point, Johnson’s friends arrived and he got up to leave with them. Dages stopped him and “basically said I’m not done with you,” the witness told other officers.

“When [Johnson] stood up, [Dages] got him by his neck and brought him back down. That’s when you heard the screaming… Me and the other guy standing over there were like, ‘What the f***?” the witness said. “Why did it have to go that far? It escalated that fast… That’s what’s so scary about it.”

In the video from the ride to the police station where Dages and Johnson can be heard arguing throughout it.

“I gave you clear instructions that you were detained. You wanted to walk off,” Dages said to Johnson.

Dages tells Johnson that he is being booked for assault because Johnson placed his hands on him.

“You know why I pushed your hand off of me — because you grabbed me,” Johnson said at one point.

Back at the station, Johnson repeatedly tells Dages to stop touching him during the booking process. Dages asks if Johnson is okay and if he is drunk. Johnson answered in the negative and offers to take a breathalyzer test which did not end up being conducted.

“I am frustrated obviously. I am a little perturbed,” Johnson said to Dages before being released.