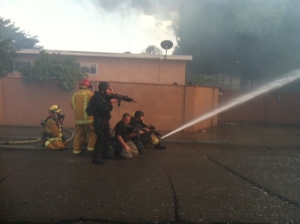 August 22, 2011 (El Cajon) – A burned body of an adult has been found near the door of a home at 1033 Prince Street in El Cajon, where a man barricaded himself into the residence last night after shooting a police officer and possibly family members. Police had received a call indicated a man carrying a gun entered the home and started a fire that swiftly engulfed the residence.

“Due to the extensive damage of the body it is unknown if it is the suspect,” a release issued by El Cajon Police this morning indicated. Police have not identified the suspect, however ECM news partner 10 News has named Kevin Collier as the shooter.

10 News also reports that a family friend has that the suspect reportedly also shot his mother-in-law and young daughter, however thus far authorities have not confirmed if additional remains were found. Extensive heat prevented officers from entering the home during the night and it is possibly that the suspect remains at large.

An El Cajon patrol car was first on the scene of the domestic dispute. The two officers separated and began working their way toward the residence, said Police Chief Pat Sprecco. “The suspect fired several rounds from the front of the house, striking one of the officers in the head.” 10 News ran a video from a photographer showing the actual shooting, editing for graphic content. The video shows the officer holding his neck and dramatically reveals a rescue: http://www.10news.com/video/28933914/index.html .

“He was able to back away before collapsing,” Chief Sprecco said. “His partner ran up to the fallen officer, and with the help of the citizen, was able to pull him behind cover. He stayed with the officer until additional officers arrived and he could be extracted from the area. The area was taken to the hospital and underwent surgery.” The officer, whose identity has not yet been released, is in critical, but stable condition.

The residence was fully engulfed in flames and the neighborhood was evacuated. Fire personnel were delayed in being able to access the home due to the shooting but kept fire from spreading to neighboring houses with help of air water drops. The incident sparked a massive response from numerous law enforcement and fire agencies in San Diego and East County.

El Cajon SWAT team set up a perimeter around the home and made entry with fire teams, confirming that “there were no live persons in the house,” Sprecco said. Detectives are investigating this morning.

The Red Cross provided food and shelter for those displaced from their homes.

The suspect was reportedly estranged from his wife. A yard sale was held the day before the shooting, advertised on Craig’s List with the following statement: “Name your own price I just want the stuff gone!!!"  He reportedly told neighbors yesterday to stay out of the area.

Jared McCarthy, a family friend, told 10 News that family had voiced concern over Collier’s mental stability in the past. “"[They've] been worried about this for some time," he said. "They've been expressing concerns to a lot of people for a while and nothing happened."