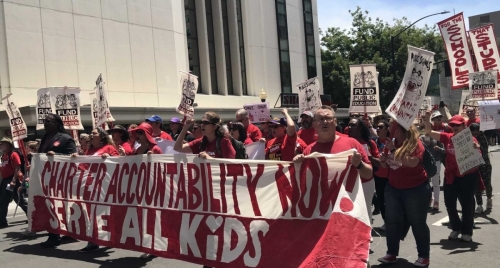 Photo:  Teachers unions rallied in Sacramento as the Assembly narrowly passed part of a package of charter school reforms. Photo for CALmatters by Ricardo Cano

May 23, 2019 (Sacramento) - Legislation that would give local school districts more control over charter-school authorizations narrowly passed the California State Assembly Wednesday in a dramatic vote that served as an initial litmus test for a package of consequential, union-backed charter regulation bills.

For nearly an hour, Assembly Bill 1505 stood just shy of a handful of the 41 votes required to advance to the Senate, in part because of concerns the bill went too far in limiting the ability of charter schools to appeal authorization denials from local school districts to county and state education boards.

Only one Republican, Jordan Cunningham, ended up voting yes on the measure. Many moderate Democrats initially were reluctant to support it, but support in the final tally included a mix of mods and liberal Democrats. Seventeen members chose not to vote.

When the bill finally passed 44-19-17, it was with an assurance from  Assemblyman Patrick O’Donnell, the bill’s author, that the bill would be amended to include a “fair” appeal process.

“We knew this was going to be a fight because this is a heavily political matter,” O’Donnell said following the floor vote. “Charter schools have a lot of resources that public schools don’t on the political front, and they employ them in the state Capitol, and we saw that today.”

AB 1505, 1506 and 1507 and Senate Bill 756, put forth as a charter regulation package, have pitted teachers unions and supporters of traditional public schools against advocates of charter schools, which are public but mostly non-union. The two education interests are among Sacramento’s most powerful, and until this past election, when union candidates triumphed in races for governor and statewide schools chief, they have largely fought to a draw.

If passed, the package of proposals would make the most significant changes in a generation to the state’s 27-year-old charter school laws. They would give local school boards more power over authorizations, enact a statewide cap on charters, prohibit districts from authorizing charters outside their geographic boundaries—and impose a two-year moratorium if the Legislature doesn’t make specific reforms by the end of this two-year session.

Supporters and legislators backing the bills say the proposed regulations are long overdue and describe them as common-sense reforms to a sector of public education that has grown too quickly, especially in cities. Charter advocates say the bills threaten the existence of an important alternative to an overworked, underfunded public school system that offers too little choice and inadequately serves low-income neighborhoods.

One of those bills, AB 1507, already passed the Assembly earlier this month by a decisive margin, 54-18. That bill is aimed at closing a loophole that has allowed several small school districts to boost their budgets by mass-authorizing charter schools outside their boundaries, in some cases by hundreds of miles. Earlier versions of AB 1507 had passed the full Legislature, only to be vetoed by former Gov. Jerry Brown.

During more than an hour of intense debate on the Assembly floor, several members of the Democratic majority admitted to mixed feelings. Some legislators said they were concerned the lack of an appeal process endangered charter schools with track records of good student performance.

Others wanted to reserve judgment pending a parallel effort by state Superintendent of Public Instruction Tony Thurmond, who, at Gov. Gavin Newsom’s request, is leading a highly-anticipated study that will provide recommendations on charter regulations this summer.

And several legislators said they believe the state’s finite funding for public schools has exacerbated tensions between charter schools and school districts and called for more school funding.

“I’m really torn over this bill,” said Al Muratsuchi, a Democratic Assemblyman from Torrance. “I want to support any measure that will crack down on bad charter schools, because we know we know that there are too many bad charter schools out there and we should shut them down. My concern is that this bill may risk shutting down good existing charter schools.”

Assemblywoman Lorena Gonzalez, a Democrat from San Diego, said Wednesday’s vote was a “tough subject” for her, too, as both a supporter of labor and a charter school parent.

“On the one hand, I completely agree with the innovation that some charter schools are engaging in,” Gonzalez said. “My understanding of the (charter) movement is it was supposed to be very limited, and we were supposed to take that innovation and scale it so that every kid in every public school would have those same opportunities.”

Gonzalez voted in favor of the bill, and said, “It’s time to press pause, bring people together (and) figure out how we get back to what this movement was supposed to be.”

The scene at the Capitol during the bill’s hour of uncertainty was hectic. Earlier in the day, about 2,500 teachers had marched the streets of downtown Sacramento in a rally organized by California Teachers’ Association, which supports the charter bills, and several of those teachers lined up outside the offices of on-the-fence Democrats to lobby for “yes” votes. Others were crowded into the Assembly’s gallery, watching, and cheered when the bill finally got enough votes to pass.

The California Charter Schools Association, which opposes the charter bills, had also organized a smaller “black parent strike” in which several protesters held signs that read, “The System Wants to Trap My Son in a Failing School.” 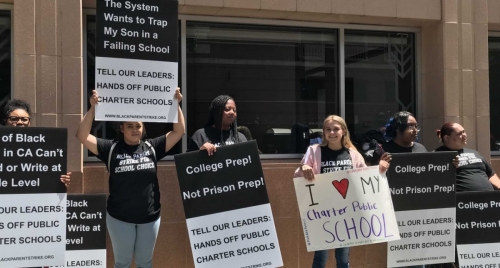 “We are deeply dismayed by today’s vote which demonstrates a limited understanding and respect for the needs of public school families and students across the state,” Myrna Castrejón, president and CEO of the state’s charter association, said in a statement following Wednesday’s vote. She described AB 1505 as “politically motivated and a slap in the face to parents and families who deserve to choose the best school for their children.”

O’Donnell acknowledged that “today’s bill thus far is the most controversial (charter) bill” state lawmakers have debated this year. He said its passage is significant because “a couple of years ago, we wouldn’t be able to get this bill through the state Legislature because of the political might that charter schools have.”

“The California Charter Schools Association’s sole mission is to have no change,” O’Donnell said. “And what they are witnessing and we are witnessing is a Legislature that’s awake, that’s watching, and wants to ensure that charter schools are held accountable and held transparent.”

Our State Legislature Watching what? California Public School Administrators, teachers and their Unions are out of control graduating illiterate and politically programmed students ? Charter schools and home schooling retains American principles that include god & country, flag, American culture, history, honesty, ethics, manners, class, respect and the right kind of control and guidance. Do these California lawmakers have any?