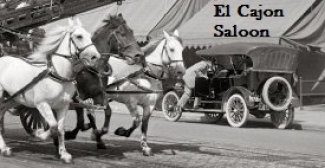 “Since vice was a proven economic boost, we’re returning to our historic roots,” Mayor Mark Lewis announced in a press conference held outside the El Cajon Brewery, a drinking establishment recently opened with help from public funds.  “This place has been so popular,  we realized it’s time to change our zoning laws. Soon we will have saloons up and down Main Street,” he proclaimed.

Councilmembers approved the changes as an appeal to the masses, after scrapping a controversial plan to tear down the East County Performing Arts Center and build a hotel that resulted in a public outcry.

Civic leaders also considered a proposal from local developers to legalize brothels, but opted against the Red Light Restoration Plan under objections from local churches. Smoking and gambling on card games will also remain illegal downtown.

In addition to bringing back saloons, as part of its Vice Revival Plan the city will also augment its Cajon Classic Cruise nights (featuring vintage cars on Wednesday evenings) by adding horse racing through the heart of downtown on Friday evenings all summer long.

“I’m placing my bets now,” the Mayor advised, “and invite you all to come out to El Cajon and do the same.”