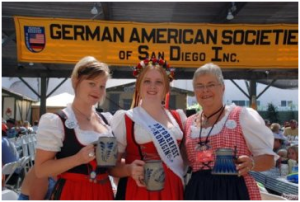 The German American Societies of San Diego, Inc., will host its traditional Oktoberfest on Friday, Saturday and Sunday during the last weekend in September and the first weekend in October. The event will be held at 1017 South Mollison in El Cajon.

The  Guggenbach-Buam, band joins the festivities from Baden-Württemberg, Germany. Hear a song by the band here. Visitors are also invited to savor authentic German food, such as bratwurst, ox-on-the-spit, potato salad, potato pancakes, sauerkraut, red cabbage and a variety of German pastries, along with a selection of German beers and liquors.

The musicians dress in traditional clothing and play a variety of German music, just as you would hear in the beer gardens in Bavaria.

You can  hear songs from the chicken dance, to polkas and waltzes, dance or sing along to Oom-pah tunes. Other activities include traditional folk dancing performances, games and contests,  vendor and craft booths, and a  Kids’ Zone.