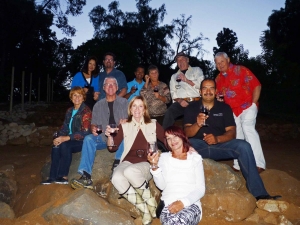 May 27, 2012 (Mount Helix) – Sipping wine and noshing on chocolate dipped strawberries, a vineyard planting team at Stephanie Young’s Mount Helix home savored a sunset and the camaraderie of friends.

“Our intention is to have 2,000 vines on the mountain,” Young, a member of the newly-formed Mount Helix Wine Growers Association, told ECM at the May 11 planting party.  “Our our first meeting, we signed up about 30 members.” 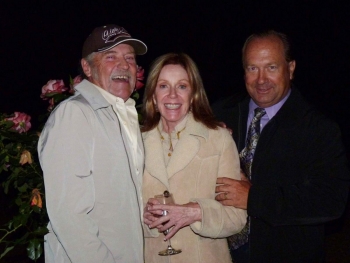 “Stephanie has the passion,” says Maness, who is now producing wine grapes from 6,000 vines a year and planting another 4,000 vines annually.

“They can produce some very good wines in the Mount Helix area,” he said, citing the areas hot summer days with fog banks and choppy hillsides strewn with boulders. Maness likens the area to the Guadalupe Valley in Mexico, where many local vintners currently source their grapes.

“It will hinge on this lady. She will push it to all these people,” he said of Young’s efforts.  “I’m going to do whatever she needs to make it happen,” Maness promised.

Young became intrigued with grape-growing after attending a charity fundraiser at Maness Vineyards.  It takes about two or three years for vines to yield grapes for a first batch of wine, but Young is already aspiring to produce her own label.

Young aspires to grow about 300 grapevines, planting a quarter acre of her two-acre property dubbed The M.A.N.O.R.  (It stands for Mindfulness, Affirmation, Nature, Open, Restoring, references to techniques used in Young’s work as a psychotherapist and crisis center counselor.)

Maness learned his craft from the San Diego Amateur Winemakers.  Our region now has more than 50 wineries, some making waves by winning prominent awards.  A trio of Ramona wineries recently beat French wines in blind-taste competitions.  A Warner Springs vintner has won international awards.  One winery in San Pasqual has reaped over 1,300 awards.

As demand for local wi 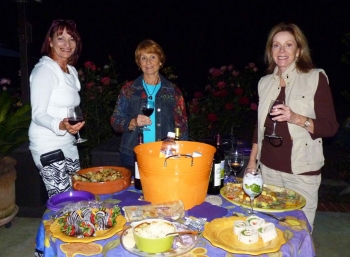 nes increases, vintners are looking for local sources of grapes to boost supply. That’s good news for property owners seeking to reap financial rewards from planting vineyards.  But grape-growing offers other advantages; the crops are xenotrophic (using less water than citrus or avocados) and vines laden with  juicy grapes also serve as firebreaks.

“In this vineyard, we took a thermal meter out,” says Maness, who applies science to the ancient art of wine making.

We hope to make a pinot splash,” said Maness. That means the grape skins are removed as soon as the juices turn pink, he explained.

Kiley has another goal in mind.  “I want to work with veterans and make them active again,” said Kiley, himself a wounded Vietnam veter 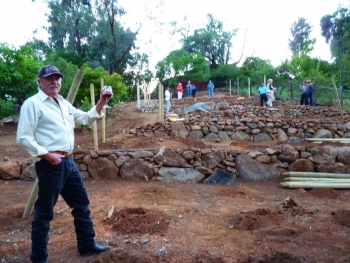 an who served in the 2nd Marines, 1st Division, Special Forces Airborne.  “We will take them in and train them…and make some money for the veterans.”

He has big dreams for East County as a wine-growing region.  “I think we’re going to blow Temecula right out of the water.”

Maness agrees.  “Everything is exploding for us,” the vineyard consultant confirms.  He believes that with more people growing high-quality grapes, fine winemakers from other regions will move here, too.

“Ten years ago, I wanted to be a wine maker. As this all started to mature, I realized that what is happening in San Diego is bigger than me. Now I’m designing and installing vineyards,” concludes Maness, who hopes to leave behind a legacy for our region.  He concludes, “The vineyards will be here, long after I’m gone.” 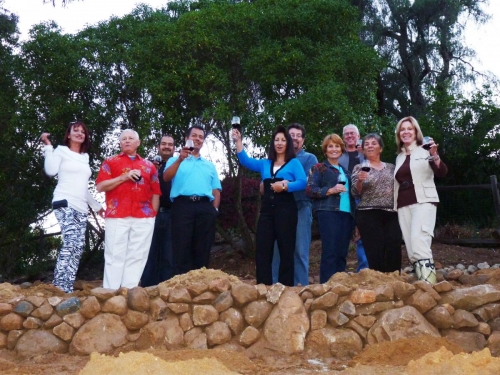