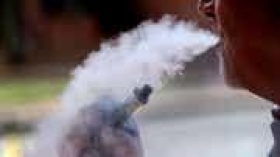 October 3, 2019 (Washington D.C.) – Biopsies of vapers’ damaged lungs reveal that inhaling chemicals through vaping is causing chemical burns, the Mayo Clinic reports, suggesting oils may not be the primary cause of serious lung damage and deaths linked to e-cigarettes and other vaping products. Meanwhile the Centers for Disease Control reports the number of serious injuries linked to vaping has soared to 1,080  including more than 100 in California, with 18 people dead as a result.

Cases have occurred in 48 states.  Approximately 71% of cases involve people who vaped products containing THC, the active ingredient in marijuana, most purchased illegally. Some had vaped a combination of THC and nicotine. However 29% of cases were in people who had not used any marijuana or THC products, leading research to investigate other causes.

Anne Schuchat, principal deputy director of the CDC, states, "We really have the feeling right now that there might be a lot of different, nasty things in e-cigarette or vaping products.” Some severe lung damage may be permanent, she adds.

Initially researchers focused on oils including Vitamin E Acetate used as a thickening agent. Some medical experts speculated that lipids, or fatty substances, may have accumulated in the lungs.

But the Mayo Clinic biopsies of 17 patients’ lungs, including two who died, had no such findings. .Instead, surgical pathologist Brandon Larson, senior author of the study, says, “Instead, it it seems to be some kind of direct chemical injury, similar to what one might see with exposures to toxic chemical fumes, poisonous gases and toxic agents." Results of the Mayo Clinic study were published today in the  New England Journal of Medicine.

The CDC now advises against all vaping due to the public health crisis. People wishing to stop smoking tobacco products are urged to see their doctors for FDA approved methods instead of e-cigarettes, e-hookahs, vape pens, or other vaping devices.

More and more cities have moved to ban vaping or restrict flavored oils attractive to young people, however the deaths and injuries span a wide age group and the products are considered dangerous for all users.

The study does not link damage to ecigs. The study says that damage is not caused solely due to the fact that it is oil based; toxins in cutting agent also appear to be a factor. This is black market THC oil cut with stuff from China.The CDC itself admits that THC oil is the common link in the overwhelming majority of the cases.

That's a substantial number -- hundreds of vaping lung injury cases that did not involve vaping marijuana or black market products.