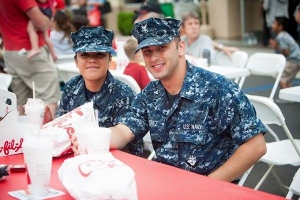 Between 4 and 7 p.m., any active duty member of the military or retired veteran with a military ID or proof of service, along with their immediate family members, will receive their choice of a free entrée. Choices include the Chick-fil-A Chicken Sandwich, Spicy Sandwich, eight-count Nuggets or three-count Chick-n-Strips. Offer valid for dine-in customers only. The event will include family-friendly activities and entertainment for guests at each Chick-fil-A restaurant.

“As a military community, we’re looking forward to this opportunity to honor all who are serving or have honorably served in the simplest way we know how -- with great food,” said Kyle Steck, a military veteran and Santee Chick-fil-A owner-operator. “It’s a remarkable event and our privilege to extend our gratitude and recognize our armed services heroes who have sacrificed so much for our freedom.”