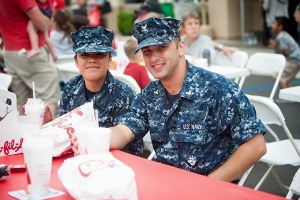 May 21, 2015 (Santee) - The nine Chick-fil-A restaurants in San Diego County, including the Santee Chick-fil-A restaurant, 9418 Mission Gorge Road, Santee, are preparing to give away a combined total of about 10,000 chicken sandwiches on Wednesday, May 20, as part of a “Military Appreciation Night” promotion.

Between the hours of 4 and 7 p.m., any active duty member of the military or retired veteran with a military ID or proof of service, along with each one of their immediate family members with them, will receive their choice of a free entrée.