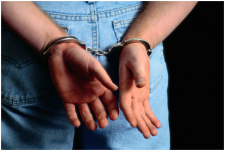 $44,000 in stolen property seized along with explosives, drugs, guns, and stolen cars

February 6, 2013 (Ramona) – Mark Ertman, an ex-convict, has been arrested along with 12 others after a search warrant found stolen property at his residence at 2411 San Vicente Road in Ramona.

“The property, known as the "Chicken Ranch," was used by a burglary ring operating in the East County to conceal and dismantle stolen property,” Sergeant B. Hout with the San Diego Sheriff said.  “The ring is believed to be responsible for over 20 burglaries during the course of the last year.”

The Ramona Sentinel reports that two of the burglaries occurred at Camp Winacka, a Girl Scout wilderness retreat in Julian, where equipment and a golf car were stolen. Thieves allegedly used Ertman’s home to store stolen goods and remove serial numbers before selling off the hot goods.

The search warrant was the conclusion of the two month investigation. During the investigation detectives seized approximately $44,000.00 in stolen property, firearms, explosives, stolen vehicles, methamphetamine for sale, $8,000.00 in cash, and made 13 arrests.

Ertman was booked into County Jail for possession of stolen property, a stolen vehicle, and a firearm.