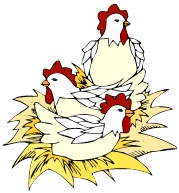 October 12, 2011 (Santee)—Without a squawk of opposition from the audience, the Santee City Council voted 3-2 to let city residents keep chickens. Roosters, however, are still banned, since only hens for egg production are allowed.

Chickens cannot be slaughtered for meat and staff still needs to peck out details such as limits on how many birds may be kept. The birds will only be allowed in single-family residential zones.

Mayor Randy Voepel, Councilmen Jack Dale and John Minto voted for the measure, with the Mayor crowing about his childhood memories of raising chickens on a Missouri farm.   Councilmen Rob McNelis and John Ryan apparently had feathers ruffled, however, and voted voted against the proposal.

Five speakers testified for the measure, including Alan Stuart, 20, who has been keeping three egg-laying hens. Stuart said rising food prices are leaving people with “no other choice” but to take up farming.

No one testified against the chicken-keeping proposal, however McNelis said he feared code compliance problems could result and thus voted to oppose urban farming in Santee.