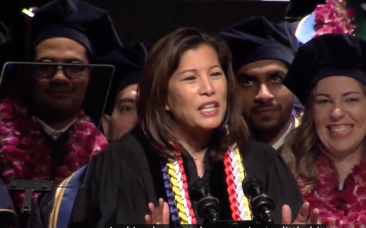 December 17, 2018 (Sacramento) - California Chief Justice Tani Cantil-Sakauye has quietly given up her Republican registration and re-registered as a no-party-preference voter, saying Thursday she had become increasingly uncomfortable with the GOP’s direction nationally and in the state.

In a phone interview with CALmatters, Cantil-Sakauye—who was a prosecutor before becoming a judge 28 years ago and California Supreme Court chief justice in 2011—said she made the final decision to change her registration after watching the U.S. Senate confirmation hearings of U.S. Supreme Court Justice Brett Kavanaugh.

“You can draw your own conclusions,” she said.

In those hearings, Kavanaugh denied allegations by Christine Blasey Ford, a Palo Alto professor, that he assaulted her when they were high school students in Maryland.

“I’ve been thinking about it for some time,” Cantil-Sakauye said, adding that she talked it over with her husband and friends. Their consensus, she said, was that “you didn’t leave the party. The party left you.”

The 59-year-old jurist, who as chief justice is the head of the judicial branch of government, is the latest high-profile Republican to disavow the party in the wake of President Donald Trump’s 2016 election, though she did so without fanfare.

Political consultant Steve Schmidt, who ran Sen. John McCain’s 2008 presidential campaign, TV personality and former congressman Joe Scarborough and others have publicly peeled off as GOP priorities shifted to reflect the president and his administration’s combative style and nationalist agenda.

Her decision also underscores the GOP’s decline in California, where Republicans’ share of registered voters has plummeted to less than a quarter of the electorate, below no-party-preference registration.

And it reflects the diminished support for the GOP among women, particularly since the divisive Kavanaugh hearings. An Associated Press poll found that women favored Democratic candidates over Republicans 56-41 percent in the recent congressional elections.

“I felt compelled to make a choice now,” said Cantil-Sakauye, the first Filipina-American Supreme Court justice and the second woman to serve as California’s chief justice. “It better suits what I do and how I approach issues.”

She answered the question about her party registration Thursday after appearing on a National Judicial College-hosted panel at the National Press Clubwith judges and justices who discussed attacks on the judiciary.

Cantil-Sakauye last year sent a pointed letter to then U.S. Attorney General Jeff Sessions and then Homeland Security Secretary John Kelly urging that federal law enforcement cease the practice of “stalking undocumented immigrants” to arrest them in courthouses. She warned that it would prompt immigrants to stop reporting crimes.

“Enforcement policies that include stalking courthouses and arresting undocumented immigrants, the vast majority of whom pose no risk to public safety, are neither safe nor fair,” she wrote.

Kelly and Sessions dismissed her request, telling her to address her concerns to Gov. Jerry Brown and that California “sanctuary” policies “threaten public safety, rather than enhance it.”

At the Thursday event, she cited the dispute over courthouse arrests, and also indirect attacks, including legislative efforts to shape the judiciary by using the budget to direct judges’ priorities, and sniping by other judges. She has resisted such earmarks.

“I don’t believe the attacks are going to stop. I do not believe the undermining and marginalizing of the branch will ever stop. And it is people’s right to speak up,” she said.

But she added that judges need to help their cause by opening themselves and the courts to the public. In California, she said, she, other judges, legislators, and schools are working to increase and improve civics education in public schools.

Republican Govs. George Deukmejian and Pete Wilson appointed Cantil-Sakauye to the trial courts, and Republican Gov. Arnold Schwarzenegger appointed her first to an appellate court and then to the California Supreme Court as chief justice.

Until recently, the court had been divided, with four justices appointed by Republican governors and three by Democratic Gov. Brown. Brown’s fourth appointee, Joshua Groban, is expected to be confirmed at a hearing next week.

Decisions during Cantil-Sakauye’s tenure as chief justice, however, have generally conveyed cohesion, with the court regularly issuing decisions that are unanimous or near-unanimous.

Law makers are stepping over the line, legislating from the bench as well as politically stepping into the limelight with bias political views, while being paid to judge. She should have just changed party affiliation, and kept her mouth shut.

namely Homeland Security arresting immigrants at the courthouse. How else would we know this is going on if court officials don't speak out?

Judges are prohibited by law from engaging in partisan matters such as endorsing candidates or campaigning for anyone other than themselves, and rightly so. But they do not lose their First Amendment rights to speak out on what they perceive as injustices, and we've certainly seen other judges do so on all sides of the aisle includng Supreme Court Justices.