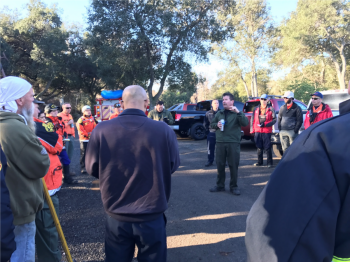 January 26, 2017 (San Diego) -- After a five-day search, crews have located the body of a child in a creek in Rainbow. The San Diego County Medical Examiner's Office will determine if the body is that of five-year-old Phillip Campbell.  The boy and his father are believed to have been swept away by floodwaters on Sunday.

Below are details provided by the San Diego County Sheriff:

The San Diego County Sheriff's Department has used many resources, including Sheriff's ASTREA (helicopter) and UAVs (Unmanned Aerial Vehicles), to assist deputies and other first responders on the ground.

The Medical Examiner's Office has identified the man whose body was pulled from the creek as 73-year-old Roland Phillips of Fallbrook.

It is believed Phillips and Campbell were swept away by flood waters into a nearby creek on Sunday, January 22nd behind a restaurant in the 4800 block of 5th Street near Interstate 15 and Old Highway 395. A family member says the two had left their home earlier in the day to check out a car for sale in Riverside County.

Mr. Phillips' body was located in the creek on Sunday night, but dangerous conditions prevented crews from safely pulling his body from the water until Monday.

CAL FIRE brought in more than two-dozen inmates from the California Department of Corrections and Rehabilitation (CDCR) to clear the area in and around the creek of debris.

The Sheriff's Department would like to thank the communities of Rainbow and Fallbrook, as well as the American Red Cross, for their outpouring of support during this difficult mission. People have dropped off food, supplies and words of encouragement to our deputies, firefighters, lifeguards and volunteers at the scene.

Special thanks to the staff of the Rainbow Oaks Restaurant for their kind hospitality.

A reminder: if you come to an area that is covered with water, you will not know the depth of the water or the condition of the ground under the water. This is especially true during the dark, when your vision is more limited. A mere six inches of fast-moving flood water can knock over an adult. It takes only two feet of rushing water to carry away a vehicle.

Play it safe. Whether driving or walking, any time you come to a flooded road, turn around.